With or Without Awards, MMA Trainer Greg Jackson Is Just as Happy 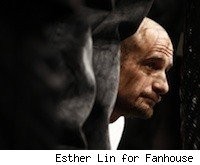 LAS VEGAS -- Ask Greg Jackson's wife, Stephanie, if she minds all the Saturday nights her husband spends away from the family, calmly instructing grown men in the art of fighting other people for money, and you'll get a slight shrug and a deadpan response.

"He just sits around," she says with a straight face. "I don't know why everybody thinks he's some big deal."

Jackson is here because, once again, he's nominated for the Coach of the Year honor at this year's World MMA Awards. It's the same award he won last year. And the year before that. It's the award that's meant to honor not only the success of his enormous stable of high-level fighters, but also all the hours he puts in on the road at events and back home in Albuquerque in the gym.

But don't expect Jackson to get too fired up about awards and honors, even now. It's "nice to be appreciated," he admits, but once you get him talking about it you get the sense that he might rather be holding pads than dressing up for an awards show.

Maybe that's because, if given a choice, he would.

And sure, I know what you're thinking: did Greg Jackson just quote a 19th-century poet to answer a question about awards within the world of professional prizefighting? The answer is yes, but anyone who knows Jackson already knows that this isn't particularly unusual behavior for him.

To Jackson, it seems as if the weird thing is not so much that he's been so successful as a coach and trainer, but that this is even a job at all.

"It was on my mind today," he says. "Just look at all this talent, all this. You have stuff like the award shows. You know, I was happy teaching in a shack."

That's not a euphemism, by the way. When Jackson met his wife he was "teaching in a 1,000-square-foot shack and living in 400 of them," he says. Stephanie walked into his gym one day learn some grappling after previously dabbling in karate and was struck by how young this new instructor was.

"He was 23 at the time," she says. "You just didn't walk into dojos or martial arts studios and see someone so young."

She was the only woman in Jackson's grappling classes at the time, she notes, but she "dropped karate like a hot potato because it was just so fun."

Fourteen years later, the two of them are still together, Jackson's shack has grown into a martial arts empire, and MMA has gone from bizarre curiosity to mainstream sport. It's been a strange ride for Jackson, and one that still surprises him at times.

Take this morning, for example, when he was working with another group of fighters, including the ones he refers to simply as "my Russians." It was one of those strange moments where he looked around the room and found himself thinking about the all the twists and turns it took to get to this place, without any of them really knowing where they'd end up.

"And we had a blast today," he says. "We were all united by this love of MMA. So when I'm there teaching moves, it was like being surrounded by this hunger to learn. You have so many different cultures and different personalities and different stories, and they're all unified by this one unique thing. So I'm thinking, I'm just a kid from the south valley of Albuquerque, New Mexico. All the fighting I did was on the banks of the Rio Grande River, and no one knows where that is. How did I get here?"

Maybe the better question is, what if he hadn't? What if the sport hadn't taken off? What if his students hadn't harassed him into being a part of it? What if he was still teaching in that shack in Albuquerque, with no awards or magazine clippings to put on the wall, and no famous students to spread his gospel?