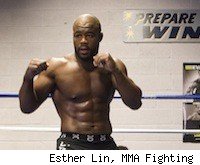 Late on Tuesday night, UFC president Dana White told MMA Fighting that he could not yet confirm the show's main event. But while the promotion has yet to announce the pairing, barring any unforeseen setbacks, it is expected to be made official within days and is likely to serve as the headliner.

Evans (16-1-1) lost out on a pair of possible title shots against current champ Jon Jones due to respective injuries to both men over the last few months. At UFC 133, he was nearly set to face Jones until a hand injury sidelined the champ. Evans was then paired with Davis, but a knee injury scuttled that fight as well.

Instead, Evans ended up facing and defeating Tito Ortiz in a second-round TKO.

Unfortunately for Evans, he injured his hand during the fight and could not take a December 10 date with Jones either, allowing Lyoto Machida to step in and fight for the belt.

If Evans wins, the UFC will once again attempt to set him up for another title shot, this time against the Jones-Machida winner.

To do so, he'll have to get past the unbeaten Davis, who has not fought since earning a unanimous decision victory over Antonio Rogerio Nogueria in March. At 9-0, Davis has cracked the top 10 of most light-heavyweight polls, but the former Penn State collegiate wrestling All-American faces a big step up in competition against Evans. His knee now healed, he's being asked to jump right into top competition.

The UFC on FOX 2 card takes place at Chicago's United Center on January 28 and is the official kickoff to the seven-year deal signed between UFC and FOX in August. A one-hour teaser event held in November drew an average of 5.7 million viewers, with 8.8 million watching Junior dos Santos capture the heavyweight title by knocking out Cain Velasquez.