Diego Brandao: I Came in Here to Destroy Everyone 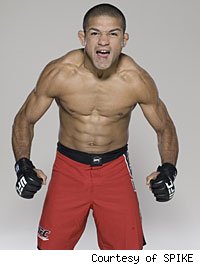 In an interview with MMAFighting.com, Brandao said Caraway was the guy in the Ultimate Fighter house he most wanted to fight because he took personally some of the things Caraway had said to him.

Brandao also talked about the reputation he has developed over the course of this season of The Ultimate Fighter, with both UFC President Dana White and coach Michael Bisping saying that Brandao looks like a beast whom the other fighters shouldn't want to touch. And Brandao gave his thoughts about why he couldn't always get along with the other guys in the house.

As you were preparing for that fight, were you able to formulate a specific game plan for Bryan? Did you have a sense for what you would need to do to win?
No, it wasn't so much planning anything. I just thought, 'This is the guy I need to beat.' And I wanted to finish him. I don't like to leave it to the judges. I like to destroy the guy.

Dana White said no one should want to fight you. How does it feel to hear that?
It's true that no one wanted to fight me inside the house. I feel good about it but that's not in my mind yet. I'm not the best because Dana says it. I want to show I'm the best because I can beat everybody else. That's what I'm out to prove. I feel confident that I can fight the toughest guys.

You didn't really seem to fit in with the other guys in the house. Did you not get along?
I didn't like when the other guys would get drunk every day while I was pushing myself. Those other guys weren't training enough for me. Even if they didn't have their own fights to train for I needed them to be ready because I needed to be training and I needed people to roll with, people to hold the pads for me. I was taking it seriously and some of them weren't.

Your attitude in the house seems a lot like your attitude in the cage. You mean business and you're not in there to be nice to anybody.
What I want is to be like Mike Tyson. I want to become like a Wanderlei Silva, a guy who gives a great show in every fight. The guys in the 145-pound class should be scared of me. I just go out there and do my job.