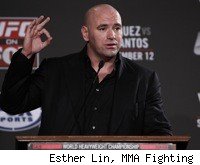 True story: at the UFC 139 post-fight press conference, Dana White not only referenced a Strikeforce Challengers fight, he also referenced a women's fight.

The mention was a surprising one for obvious reasons, but it got me wondering whether White, who, along with his partners at Zuffa, now owns Strikeforce, was warming up to the idea of promoting women's fights.

Not so fast. The UFC president still believes the divisions are too shallow on talent right now.


"As the sport continues to grow and as time goes on, maybe that will change," White said. "Maybe it will change or maybe less women will get involved, I don't know. We'll see what happens. Time will only tell. I don't know. But yeah, I still feel the same way."

Of course, White has made his stance on women's MMA pretty clear over the years. In short, he's not against women competing in MMA, but he simply doesn't believe there are enough top-level athletes fighting right now to build divisions around. It's a fair argument that even the most devoted supporter of WMMA would probably agree with.

That said, the times they are a changin', and after Gina Carano's absence took some of the spotlight away from the female fighters, the buzz seems to be coming back, thanks in large part to the emergence of Rousey, who White admitted after the presser that he was impressed with.

So for now, women's MMA fans will have to settle on a mention from White. You gotta start somewhere.