John Olav Einemo Back in UFC, Likely to Face Mike Russow at UFC on FOX 2 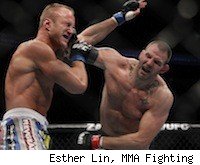 Shortly after losing in his UFC debut in a bout that won Fight of the Night at UFC 131, John Olav Einemo was surprisingly cut from the UFC. As it turned out, Einemo was part of the fallout from an ongoing business issue between his Golden Glory management team and the UFC.

Now, it appears a resolution has been struck, as Einemo is back with the promotion and will take on Mike Russow as part of the upcoming UFC on FOX 2 card on January 28, MMA Fighting has learned.

Sources confirmed that both sides have verbally agreed to the bout.

Einemo (6-2) faced Dave Herman at UFC 131, and engaged in a hard-fought battle before falling in a second-round TKO. The fight had been his first MMA bout in over four years. But even after the spirited scrap, he was one of several Golden Glory fighters -- including Alistair Overeem and Marloes Coenen to be dropped by Zuffa.

UFC president Dana White later said the issue stemmed from Golden Glory's management practice of having promoters pay them directly instead of the fighters.

It remains unclear how the issue was resolved, and whether Einemo -- like Overeem -- parted ways with Golden Glory or found a way to work within the UFC framework.

Meanwhile, Russow (14-1, 1 no contest) will be hoping to extend his impressive 10-fight win streak. In his most recent fight, Russow stopped Jon Madsen by TKO in the second round of their March 2011 encounter.

UFC on FOX 2 will take place from the United Center in Chicago. Four fights are expected to air on the network television broadcast, but the UFC has so far been mum on matchups.