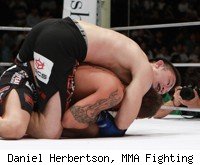 A lightweight title bout between Shinya Aoki and Satoru Kitaoka and a bantamweight reserve bout between Hideo Tokoro and Yusup Saadulaev are recent additions to the New Year's Eve "Genki Desu Ka!!" event at the Saitama Super Arena in Saitama, Japan.

DREAM last weekend made official that Aoki will be defending his DREAM belt against former teammate Kitaoka in a five-round affair. On Tuesday, Tokoro and Saadulaev, who were both ousted in quarterfinal bouts in September, were given a second chance at returning to the tournament. The reserve winner could potentially enter the finals in the event an injury replacement is needed.

Aoki (29-5), who will be fighting for the fourth time in 2011, is looking to extend his win streak to seven as well as a successful second title defense. Aoki last fought in September, submitting "Razor" Rob McCullough with a neck crank at DREAM.17. Kitaoka (29-10-9) is a former Sengoku lightweight champion who made his DREAM debut in September, beating Willamy Freire by split decision.

The current "Genki Desu Ka!!" lineup is below.