Yushin Okami: UFC Will Bring the Heat in Japan 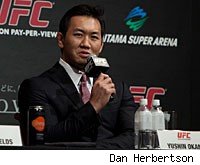 Several UFC fighters met the media in Japan over the weekend to promote the Feb. 26 UFC 144 show at the Saitama Super Arena, and one of the big questions facing the promotion is whether it can engage Japanese fans who have largely turned away from combat sports in recent years.

One of the Japanese fighters on the show, Yushin Okami, thinks there is no question that the UFC will deliver just the kind of product that Japanese fans want.

"It's been a while since I've fought in Japan, so I'm excited. I would love to bring the heat and atmosphere of the real UFC over to Japan," Okami said at the UFC's press conference.

Okami has been the most successful Japanese fighter in the UFC, going 10-3 inside the Octagon and losing only to Anderson Silva, Chael Sonnen and Rich Franklin. But his long-term success in the UFC may actually make him less known to fans in his home country because he hasn't fought back home in almost six years. While other successful Japanese MMA fighters have been fighting in front of Japanese fans, Okami has been fighting in the United States, with occasional stops in Ireland, Germany and Brazil. And Okami was never a big star in Japan, fighting only a couple of low-profile bouts in Pride.

So Okami's name won't move the needle in Japan, but his fight with Tim Boesch is a good middleweight matchup, and the card -- headlined by Frankie Edgar vs. Ben Henderson -- is very impressive from top to bottom. What the UFC is bringing to Japan is just a very good fight card, the best that Japanese fans have seen in a long time.