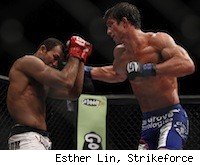 Strikeforce has requested a January 7 date to host an event at The Hard Rock Hotel & Casino in Las Vegas that would be televised by Showtime.

Once approved -- and given parent company Zuffa's track record in Nevada, that is a near certainty -- the previously unannounced show would be the first Strikeforce event to be scheduled for 2012.

Until now, the only future Strikeforce event planned had been the upcoming December 17 Strikeforce: Melendez vs. Masvidal event in San Diego, California.

The move is yet another possible indication that Strikeforce will exist past its current deal with Showtime, which is set to expire around March 2012.

In the past, Zuffa executive and UFC president Dana White voiced doubt that Strikeforce and Showtime could salvage their relationship, but a change in Showtime's leadership structure allowed White to inject himself in negotiations, and recent talks have reportedly been far more productive.

While final word on an extension has yet to come from either side, the booking of events in early 2012 could be seen as a positive step towards a likely deal.