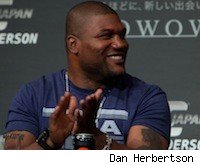 Quinton "Rampage" Jackson is very, very excited to to fight in Japan. All you have to do is ask him.

In a Monday morning press conference in the Land of the Rising Sun, Jackson told the Japanese media that it took some effort on his part to ensure his place on the UFC 144 card, and that he finally had his request granted after a non-stop, one-man campaign.

"I had to fight and complain and b---- to my manager," he said. "Now I think the representatives of UFC are upset with me a little bit ... But ask me, do I care?"

For Jackson, any amount of trouble was worth it because of his love of Japanese audiences, who in his opinion value effort above results, a seismic shift from American audiences.

Jackson, who will face Ryan Bader in the co-main event on February 26 in Saitama, Japan, is no stranger to Nipponese culture. From 2001 to 2006, he fought there 18 times while under the PRIDE promotion.

"Back when I was fighting here, I had so much energy," he said. "I just wanted to put on a good show for the fans because all the energy they give. In America, you're under so much pressure to win at all costs because the fans talk s--- to you if you lose even if it's a good, exciting fight. In Japan, it's just a different energy. Who knows? Maybe I'll take more chances and not care because it's all about the crowd. I react to the crowd. I don't care about the people watching on TV."

It was in Japan where he authored some of his most memorable career moments, including the often-replayed powerbomb knockout win over Ricardo Arona in June 2004. That fight holds particular significance to Jackson because it took place on his 26th birthday.

It was also in Japan where Jackson became renowned for his slams, a particular favorite of the Japanese crowds who enjoyed his aggressive, improvisational style. In a rare bit of public introspection, Jackson noted that since signing with the UFC though, his game has gotten standup-heavy at times.

"Actually my standup has evolved a lot since I last fought here, but at the same time that's what's gotten me in trouble a lot lately," he said. "Everyone sees me boxing a lot more, so they're creating great game plans to counter my boxing. In Japan, I used to slam a lot and put on more of a show because the energy from the fans gave me power and I don't feel the same energy in the US. So, I can't honestly say I improved or evolved in a good way since leaving Japan."

But in some ways, that doesn't matter to Jackson right now, because he's only concerned about entertainment value. One new wrinkle the fighters will have to prepare for is fighting early in the morning. While most fights take place late Saturday night, this event will occur in the morning in Japan in order to sync up with American TV viewing habits.

Jackson noted that as a youth, he was in plenty of fights that came unexpectedly, and he has the time to plan for an early morning peak. He also said that the hardest part of fight day is usually the anticipation of what is to come, and that competing early in the day would cancel out much of that nervous energy.

Beyond that, he said that the biggest obstacle in his way is Bader, and more specifically, making sure he and his opponent understand the collective mind set of Japanese fans.

"The only thing that matters when he steps in the cage in Japan is that he comes in to put on an exciting show," he said. "I'm all about putting on an exciting fight in Japan. One thing I love about Japanese fans and why I love them the most is that they don't care if you win or lose. All they care is if you have samurai spirit, that you put on a good fight. That's why Japanese fans are my favorite. And American fans are jealous that I say that all the time."