Miesha Tate, Ronda Rousey Spar Over Who Should Be Next Title Challenger 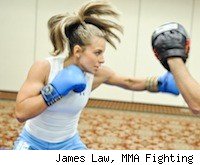 Just four fights into her professional fight career, Strikeforce's Ronda Rousey insists that she is ready to face reigning women's bantamweight champion Miesha Tate, and that the fight should be signed imminently. Tate, however, says that the young upstart is not quite ready for the increase in opponent caliber, and that she should wait her turn.

The debate between the two stems from the fact that Strikeforce has yet to announce its intended direction for the division's future. For her part, Tate hopes to bypass Rousey's challenge in order to face Sarah Kaufman in a rematch of their May 2009 fight.

In a charged, joint interview on Monday's edition of The MMA Hour, the two debated their opposing viewpoints on the 135-pound weight class. While Rousey believes that a title fight with Tate would be the most marketable women's fight available, Tate is skeptical about Rousey's experience level and thinks it would be unfair to see her leapfrog more seasoned fighters simply because she asked the loudest for a title shot.

Tate opened up the proceedings with the first shot.

"What happens when she gets a failed arm bar and someone ends up on top pounding her face in?" she said. "Is she going to tap out or quit? We don't know. We haven't seen that yet. I think it's kind of silly to put her in with me because that's what I'm going to do. I'm going to take it to her. A lot of people are underestimating me. That's fine. That always seems to be the case. Make no mistake, if Ronda is my next fight, I'm going to come in with a vengeance you've never seen before, because to be quite honest, it's probably going to piss me off."


Tate said that she believes either Kaufman or Alexis Davis is more deserving than Rousey by virtue of their respective experience levels and longer histories of success. Kaufman -- a former divisional champ -- is 14-1 while Davis is 11-4. Rousey, meanwhile, is 4-0 after turning pro less than nine months ago.

Despite her relative neophyte status in MMA, Rousey's early performances have been so dominant -- each win has come in less than one minute, and finished in arm bar submissions -- the thought of Rousey-Tate has grown steam as Rousey has continued her campaign for the slot.

Rousey responded by noting that Strikeforce does not use a ranking system and simply looks for the fights that will make them the most money. In her mind, Rousey-Tate is the money fight.

"I really feel 100 percent that a fight between her and me needs to happen," Rousey said. "It'll be great for women's MMA. It'll be the first highly anticipated fight in women's MMA for a long time ... We need to capitalize on the opportunity while we still have it. I don't want to risk her losing the title and us not being able to fight each other for the title."

Tate said that Rousey's approach to it has been insulting to the other fighters in the mix, but Rousey justified her tactics, noting the attention it's gotten them in recent weeks.

"I think it's working because she's pretty," Tate said. "If you weren't pretty, it wouldn't matter what you said or didn't say. That's why you're getting this attention. I don't know, I guess I personally like more of a humble approach. You can say you want to be the Chael Sonnen of women's MMA, and Chael gets a lot of press and everything like that, too, but no one likes him."

"Yeah, but he makes a lot of money and he gets a lot of title shots, too, doesn't he?" Rousey responded, pointing out how much Sonnen's profile has grown since changing his promotional approach.

After Tate pointed out that Rousey hasn't even yet competed at 135 pounds a single time, and should have to do so before fighting for the belt, Rousey made a different comparison, one to former UFC heavyweight champion Brock Lesnar, who captured his title in his third fight in the octagon. That led to an interesting exchange between the two about a possible matchup.

"What happens if I go out there and I just cream you?" Tate asked. "Then all your hype is just over. Then Ronda was just another pretty face."

"That's a risk I'm wiling to take, and you should be willing to take some risks, too," Rousey said.

"The longer you wait, the more of an advantage I'll have," Rousey said, predicting that she'll be improving at a faster rate than Tate in the future.

Moments later, Tate shot back, saying, "I feel like you're being really selfish and only thinking about yourself."

Of course, there is at least one other side to this story, and it's Kaufman's. The former champion wasn't a part of the debate between the two although she did give her take later on. While Tate said that a rematch between her and Kaufman could sell based on the revenge angle, Rousey doubted it would be a big hit with audiences, saying it probably wouldn't gain much more interest than their first go-around.

"Sarah Kaufman kind of gives boring interviews, she's not a supermodel and the way she fights, she doesn't finish matches in extraordinary fashion," she said. "It's just kind of being realistic. I'm sorry that I have to say things bluntly and offend some people. I just want there to be a highly marketable, exciting women's title fight, and I want to be part of that because I feel like I could do a really good job, and you could, too. I think the two of us could do a better job of that than you and Sarah Kaufman."

The two ultimately agreed on little except that in the end, they would abide by the decision of the Strikeforce matchmaker Sean Shelby. That, and the fact that they hope to increase the number of eyeballs on women's MMA, though they disagreed on the method to do so.

As for Kaufman, she is expecting the fight she was promised against Tate, and has no qualms about dealing with Rousey at a future date.

"It would be way smarter for the longevity of the division to work her way up," she said. "If she runs through people -- which I don't think she will -- then I'll be happy to beat her face in. She wants to be pretty? She won't be as pretty after our fight."