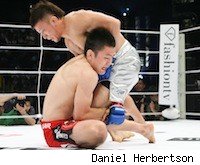 On the same day when the UFC officially announced its return to the Asian market with a press conference in Japan, two of the area's biggest promotions announced that they would team up to increase their visibility and bolster their star power.

DREAM and ONE Fighting Championship have declared an intention to co-promote events and exchange fighters between them, the heads of both promotions announced on Monday.

The change is effective immediately. In a press release, the sides said fighter exchanges are expected to happen quickly, and that a joint promotional effort has been tentatively scheduled for March 31 at Singapore Stadium with the name "ONE FC/DREAM in Singapore."

"DREAM and ONE Fighting Championship will work together to lead the sport of MMA in Asia to a better future," DREAM event producer Keiichi Sasahara said in a release. "DREAM has some of the best fighters in the world and we also have deep experience of putting on world-class events. ONE Fighting Championship has the largest media platform in Asia and many other assets. I see many great synergies with this partnership. It is certainly a new era for everyone in Asian MMA."

Of the two promotions, DREAM has the longer history, producing over 20 events in its 3+ years of existence. It also has the deeper roster, with highly regarded veterans including Shinya Aoki, Gegard Mousasi, Katsunori Kikuno and Gerald Harris. ONE FC has only been in business since early 2011 and produced just one fight card with other scheduled into early 2012. Thus far, however, ONE FC has swiftly penetrated the Asian market, reportedly signing deals that make its future shows available in 500 million households across Asia.