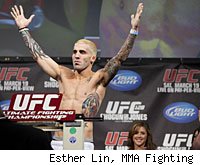 Fighting in front of his home-state fans in New Jersey, Pellegrino was defeated in just 50 seconds by Patricky "Pitbull" Freire, and he said afterward that he won't fight again.

Pellegrino telling the fans (many of whom were his friends and family) that he had lost fair and square seemed to quell their anger at an apparent fast stoppage in his loss to Pitbull. Although Pitbull leveled Pellegrino with a left-right combination and then jumped on top and hit him with several punches on the ground, Pellegrino did still appear to be intelligently defending himself at the time of the stoppage, and the fans loudly booed the outcome.

A UFC veteran who went 7-5 inside the Octagon, Pellegrino left the UFC on a two-fight losing streak in May, saying he wanted to spend more time with his family. It was a surprise when he returned to MMA to fight for Bellator, but it's not a surprise that he's now saying he's done fighting at the age of 32.