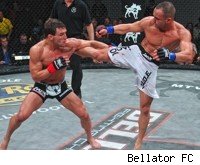 Michael Chandler defeated Eddie Alvarez in what may have been the best MMA fight of the year, winning the Bellator lightweight title. Does that make Chandler a Top 10 lightweight?

I loved the Chandler-Alvarez fight, and I like the 9-0 Chandler a lot. I think he's one of the most talented young lightweights in the sport, and I think it speaks well for Bellator's ability to spot talent that they signed him for their lightweight division. (Chandler fought twice for Strikeforce before Bellator scooped him up, and it was obviously a big mistake for Strikeforce to let him get away.) But while Chandler would be in my Top 20, I just can't put him in my Top 10 yet.

So what could Chandler do to move into the Top 10? I'd love to see Bellator match Chandler up with Shinya Aoki. The previous plan had been to book an Alvarez-Aoki fight, but now that Chandler is the champ in Bellator, Chandler-Aoki would be more appealing. I'd also like to see Chandler take on Kurt Pellegrino, a lightweight who had a winning record in the UFC and is now set to make his Bellator debut against Patricky Freire. Putting Chandler in the cage with a UFC veteran would give us all a good idea how he stacks up against UFC lightweights.

Chandler's win against Alvarez was obviously the biggest of his career so far. I want to see him get another big win before I put him in the Top 10.

1. Frankie Edgar (1): If there was any doubt after Edgar's two decision victories over B.J. Penn and his draw with Gray Maynard, there's no doubt anymore: Edgar's TKO win over Gray Maynard makes him the top lightweight in the world. He'll have his hands full, however, when he takes on Ben Henderson in February.

2. Gilbert Melendez (3): Melendez, the Strikeforce lightweight champion, should be fighting one of the top lightweights in the UFC. Instead, he'll defend his belt against Jorge Masvidal, who's not in my Top 10 or -- as far as I know -- anyone else's.

3. Gray Maynard (2): No two fighters have ever met inside the Octagon four times, but if Maynard wins another couple of fights, he'll have a good case that he deserves to get a fourth shot at Edgar. Maynard is 1-1-1 in his three career fights against Edgar so far.

4. Ben Henderson (6): The former World Extreme Cagefighting lightweight champion, Henderson is now 3-0 in the UFC, with unanimous decision wins over Mark Bocek, Jim Miller and Clay Guida. He'll get a chance to make his case for being the best in the world when he fights Edgar in Japan.

5. Clay Guida (4): Guida's four-fight winning streak was snapped by Henderson, but he'll be back. One thing we can always count on from Guida is that he's going to stay active, win most of the time, and put on a good show when he loses. Guida has won the Fight of the Night award in four of his last five losses.

6. Anthony Pettis (5): Pettis already has a win over Henderson on his record, and that win was supposed to earn him a shot at the UFC belt. Unfortunately, things didn't work out that way for Pettis, and when he lost to Guida he lost his chance to fight for the title. But Pettis looked good in beating Jeremy Stephens in October, and if he beats Joe Lauzon at UFC 144, he'll have to be considered a strong contender for a lightweight title shot.

7. Jim Miller (9): Miller's loss to Henderson in August may have cost him a title shot. The good news is that his next opponent, Melvin Guillard, is tailor-made for Miller to take down and submit.

8. Shinya Aoki (7): Aoki's submission victories over Lyle Beerbohm, Rich Clementi and Rob McCullough have been impressive enough, but none of those three is even close to a Top 10 lightweight. Aoki's level of competition leaves a lot to be desired.

10. Nate Diaz (NR): It's great to see Diaz back at lightweight and looking good in his win over Takanori Gomi. Diaz is too lanky for welterweight, but at lightweight he looks great, and his fight with Cerrone should be tremendous.