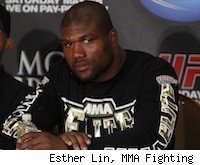 Quinton Jackson is headed back to Japan.

After campaigning for a spot on the UFC 144 card immediately after his loss to Jon Jones in September, the UFC has granted Jackson's wish of fighting in the Land of the Rising Sun. Jackson (32-9) has agreed to meet Ryan Bader (13-2) on the Feb. 26 card at the Saitama Super Arena in Saitama, Japan. UFC CEO Lorenzo Fertitta confirmed the news with ESPN.com on Thursday.

Amazingly, when Jackson meets Bader at UFC 144, it will mark exactly six years since his last fight in Japan. On Feb. 26, 2006, "Rampage" defeated Yoon Dong-Sik via unanimous decision at PRIDE 31. In total, the former PRIDE star competed in 20 MMA/kickboxing fights in Japan.

The 33-year-old Jackson is 2-2 in his last four fights. He had won two in a row before losing to Jones in a UFC light heavyweight title fight at UFC 135.

Bader, 28, snapped his two-fight losing streak last weekend at UFC 139 when he knocked out Jason Brilz in the first round. Prior to that win, Bader had lost to Jon Jones and Tito Ortiz in 2011.

UFC 144 will mark the organization's first event in Japan since Dec. 2000. The main event will feature Frankie Edgar vs. Ben Henderson for the UFC lightweight title.