An Offering of Thanks to Some of MMA's Most Generous 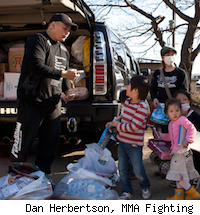 Fighting and helping seem a counterintuitive combination, yet MMA is blessed with many giving athletes and personalities who are difference-makers in their communities and the world at large.

Many of those selfless efforts go undocumented and under the radar, but in the spirit of the holiday season, we've dug up some of the kind works undertaken by the men and women of the MMA world.

This list is by no means meant to be comprehensive; rather, it is a sampling of some of the acts of generosity that often get lost in the shuffle of the everyday news cycle. And it is a chance to say, Thanks.

Enson Inoue
In the wake of the devastating March earthquake and tsunami in Japan, Inoue -- a Japanese-American with long roots in the sport -- was a one-man effort, traveling through the hardest-hit areas and offering assistance to the region's residents in the form of clothing, food and supplies, as well as toys to children. Inoue reportedly drained his own personal savings in an effort to bring relief to every person he could reach.

The UFC/Dana White
The UFC's charitable causes are many, though they often go unseen by the public and media. But in January, the promotion ran an event on a US military base for the second time in its history, with all seats free to base personnel, and proceeds from a corresponding online auction as well as donations benefiting wounded veterans through the Intrepid Fallen Heroes Fund. The event ended up raising $4.1 million for the fund.

Brian Stann
The president of Hire Heroes USA, a non-profit group that offers job search and placement assistance to US military veterans, Stann -- a former US Marine and current UFC middleweight -- helps run an organization with crucial importance during a time of economic hardship for many. The group has a special focus on the two demographics statistically most likely to be unemployed: young veterans of the wars in Iraq and Afghanistan, as well as wounded or disabled veterans.

Alex Davis, Dan Lambert, Joe Mullings
In early January, the state of Rio de Janeiro, Brazil was hit hard by torrential rains that caused landslides and killed over 800 people. Among the hardest-hit communities was Nova Friburgo, the hometown of well-known MMA manager Alex Davis, along with UFC lightweight Edson Barboza, and others. Davis was in Nova Friburgo at the time and volunteered his time and resources to help, while Lambert and Mullings, gym owners of American Top Team and The Armory, respectively, started Combat Athlete Charities in order to support his relief efforts.

Brendan Schaub
When UFC heavyweight Schaub first visited Brazil in June, he was able to see some of the impoverished parts of the country, and he promised to return with some help when he came back to fight in August. True to his word, Schaub delivered several duffel bags worth of training equipment to a local gym in the underprivileged part of Tijuquinha, Brazil just days before his fight with Antonio Rodrigo Nogueira at UFC 134.

American Kickboxing Academy
Many gyms have long roots in their communities and take part in volunteering, and San Jose, California-based AKA is among the more active ones. Among the groups the team benefits is Turning Wheels for Kids, a local organization that provides bicycles to underprivileged kids. Fighters including Cain Velasquez, Cung Le, Gilbert Melendez, Daniel Cormier and "King" Muhammed Lawal have offered up their time to the cause. In the spirit of Thanksgiving, the gym's fighters also recently volunteered time at Martha's Kitchen in San Jose, helping to feed the hungry.

Jon Jones
By now, everyone has heard the story of Jones helping to stop a robbery just hours before he won the UFC light-heavyweight champion. But that wasn't his only charitable act of the day. Indeed, he donated his substantial after-party appearance fee to a charity designed to combat children's cancers.

Jose Aldo
After every one of his fights, the UFC featherweight champion autographs and auctions off his fight gear to benefit his team's Nova Uniao community program, which is designed to assist underprivileged youth.

Ben Askren
After visiting tornado-ravaged Joplin, Missouri, earlier this year, the Bellator welterweight champion secured 300 tickets to Bellator 53 for Joplin residents to give them one night of enjoyment. "It's not a huge gesture. It's not like we're rebuilding their houses, but every small thing helps," Askren said.

Dan Henderson/Clinch Gear
The UFC light-heavyweight gave fans a thrill with his recent fight with Mauricio "Shogun" Rua, a fight which was quickly named as one of the best all-time scraps. But Henderson and his Clinch Gear company were also giving back in other ways, pledging to provide a Thanksgiving Day meal to a family of four for every official walkout T-shirt purchased through his website. On Thanksgiving, the company expects to feed over 2,000 families (8,000 people) through the Denver Rescue Mission and San Diego Rescue Mission, and the promotion has been extended through Christmas with additional donations to be made at that time.

The Fans
Few sports have a community as tight-knit and passionate as MMA, and even when you argue, you come together when it matters. Fans have generously donated to a countless number of causes. Among the most recent is the Daniel James Miller Foundation. The son of UFC fighter Dan Miller is in need of a kidney transplant and insurance does not pay for the entire procedure. The Foundation was set up in order to fund his treatment, and the family recently released a statement saying they were left "speechless" following the overwhelming support they have received.