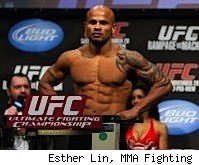 "Maiquel is still on the Intensive Care Unit and might stay there for few more days, when he'll go through a catheterization," Falcao's manager Marcelo Brigadeiro told TATAME on Wednesday. "He's lucid and improving fast."

"Our sole focus and concern right now is for Maiquel and his family," Bellator CEO Bjorn Rebney stated on Wednesday to MMAFighting.com. "Our thoughts and prayers go out to him and his family as they go through this ordeal."

Fighting out of Chute Boxe, Falcao holds an overall MMA record of 28-4, 23 wins by way of (T)KO. Falcao was a victor in his one fight with the UFC, but was released six months later due to legal problems brought on from a 2002 assault charge in Brazil.