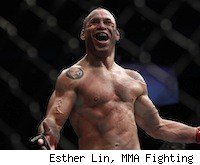 At 41 years old, Dan Henderson's forward march is downright ludicrous. A winner of seven of his last eight fights, Henderson re-entered the UFC paired with one of the most destructive strikers the sport has known and again proved that he was far from ready to being put out to pasture.

In this sport, it's rare to be madly debating the future prospects of a fighter his age, but Henderson is the rarest of birds. Not only does he continue to excel, he is capable of being relevant at two weight divisions. That will make his future trajectory an adventure, because even if he loses at one weight division, he can always switch back to another and poof, instant contender.

Dan Henderson
It's so far yet unknown just how much time Henderson or his opponent Mauricio "Shogun" Rua will need, but a lot of Hendo's future plans depends on a recovery layoff. Over the weekend, we heard rumors that middleweight champion Anderson Silva won't be ready to defend his belt until June 2012. And of course, Chael Sonnen remains the frontrunner for the spot. Since Silva is the only divisional fight Henderson's interested in, it seems unlikely that the middleweight class is in his immediate future. Instead, he's much more likely to stay paired up with the big boys of 205, where he gives up size but no power.

Prediction: Though it's hard to project the divisional outlook without knowing when Henderson will fight again, there's only a handful of fighters worth his time. The loser of the Jon Jones vs. Lyoto Machida title fight sounds like a good matchup against a credible opponent. Aside from that, how about a rematch with Quinton "Rampage" Jackson?

Mauricio Rua
You've got to feel for Rua, who is just 3-3 in his last 6 fights but has two somewhat controversial losses included. Most felt like he beat Machida in their first encounter, and against Henderson, his late performance could have easily salvaged at least a draw. Nevertheless, Rua remains one of the division's elite, and like Henderson, should be matched accordingly.

Also like Henderson, he's likely going to need a lengthy period of time off to recover. Given the exciting performances he's taken part in, he deserves every day necessary.

Wanderlei Silva
It almost never fails that a once-great fighter left for dead manages to have at least one last shining moment before fading away. With Silva, we can't be quite sure if his win over Cung Le is a middleweight rebirth or that last moment of glory.

Silva looked good in the rematch, rebounding from an early stumble in which he was rocked and knocked down to finish the Bay Area star late in the second round. Now that he's won, he goes from talk of retirement to a debate of where exactly he fits in the division.

Prediction: A date with Demian Maia would work well here, but given their friendship, it's an idea not likely to get very far. So I'll match him up with the winner of UFC 142's Vitor Belfort vs. Anthony Johnson fight.

Cung Le
It had been over a year since Le fought, and while his bout with Silva was a crowd-pleaser, it's certainly not the result he wanted in his UFC debut, and in front of his hometown fans. The big question now is whether or not he will retire.

Even though he's 39 years old and has a blooming film career, Le like many other fighters likely can't stomach the thought of retiring on a knockout loss. He feels he was competitive in the fight and can still perform at a high level. Because of that, I doubt he will seriously consider calling it quits. He may sit out for a while, but he will fight again.

Prediction: Le spends a few months on the sidelines, then comes back to the octagon in mid-2012.

Urijah Faber
There's no prediction to make here as we already know that by virtue of his submission win over Brian Bowles, Faber will have his third date with Dominick Cruz in a UFC bantamweight title fight to be held sometime next year. It is worth mentioning though that Faber is 0-4 in his last four title fights. After three of those losses, he needed to win only one fight to get his next championship opportunity. One other time, he needed two wins. So all told, he's 5-4 in his last nine fights; 5-0 in non-title fights and 0-4 for the gold. Bottom line: I don't think Faber deserved this quick elevation. As impressive as his win was, he should have fought Renan Barao for it. In this case, business interests were moved ahead of fairness.

Brian Bowles
For the first time, Bowles looked outclassed in the cage, as he never really got started in his loss to Faber. There are a couple possibilities for him, including a rematch with Miguel Torres, who won on the undercard of the event. But I think another track is more likely.

Martin Kampmann
After heartbreaking back-to-back decision losses to Diego Sanchez and Jake Shields, Kampmann finally got the judges to see a fight his way in the end. Kampmann remains an intriguing talent in the division, because he has excellent skills in every department, yet he rarely turns up his aggression level and has never truly flashed fight-changing one-punch power. On any given day, he's capable of beating anyone, but has to prove he's capable of beating elite talents.

Michael McDonald
Among the many storylines that flew under the radar on Saturday night was the excellent performances from two prospects: bantamweight McDonald and middleweight Chris Weidman. It's important for both divisions, as bantamweight champ Cruz has beaten most of the division's top five already, while the middleweight class has little talent under the age of 30. McDonald's standup skills have proven fantastic, and the 20-year-old is rapidly making waves.

Chris Weidman
Given Weidman's displayed wrestling and grappling excellence (he tapped out Tom Lawlor with a D'arce choke), it seems time to match him up with someone who can cancel that out and see if he passes the test.