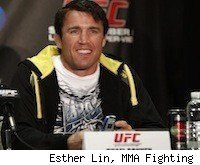 Michael Landsberg, host of TSN's Off the Record, blames his own confusion for an awkward interview conducted last week that abruptly ended when UFC middleweight contender Chael Sonnen walked off the show (video).

And this was after the interview had already been once restarted at Sonnen's suggestion.

Landsberg is known for asking tough and arguably, aggressive questions and the longtime Canadian sports journalist didn't start off on the right foot when he opened the satellite interview by asking Sonnen if he "backed down" from his initial offer of putting his UFC career on the line against champion Anderson Silva. Sonnen responded by asking Landsberg to check his tone and facts.


Landsberg said Monday he figured the opening question would be a good way to push Sonnen's buttons in a gentle way to bring out the best of Sonnen's outspoken personality.

"I knew going in that he liked to be challenged -- or at least I thought he did," Landsberg told host Ariel Helwani. "I knew he's the greatest promoter ever. I know that he's at his best when he's got a little edge to him."

Landsberg said he had never spoken with Sonnen before that day, describing Sonnen as a "total stranger." However, Landsberg felt he hit it off with Sonnen when he introduced himself before the recorded interview.

But the tone quickly changed when the cameras started rolling and Landsberg pressed Sonnen with the question of "backing down."

"I thought this would go to a fun tongue-in-cheek place," Landsberg said. "Like he clearly had his tongue in his cheek in the Octagon when he challenged Silva. There was no way Silva was going to accept those terms."

Landsberg, who pointed out the shortcomings of interviewing someone via satellite, admits he had difficulty reading Sonnen.

"I was pissed off but I'm also trying to match his anger to do good television," he said. "I wish from my standpoint I would have done it better. It was tough to undestand what was going on."

According to Landsberg, Sonnen was the first person in 3,000 shows to walk out of an interview with him.

"I have no animousity towards him at all. This is my confusion more than anything," Landsberg said. "He's a great interview. He's the kind of guy where a show like 'Off the Record' lives for."