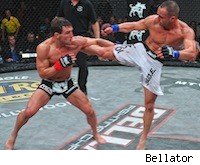 You couldn't blame new Bellator lightweight champion Michael Chandler if he had conflicting feelings about his Saturday night. On one hand, he emerged the victor in a Fight of the Year contender, capturing his first championship in the process. On the other, his thrilling win was quickly relegated to the background of a brilliant fight night when Dan Henderson and Mauricio "Shogun" Rua stole center stage in their UFC 139 main event spectacle.

But just nine fights into this career, the unbeaten Chandler has a realistic take on the issue, happy with having his name linked with those of the longtime legends.

"It's great to have my fight with Eddie compared to a fight with the hype and the outcome of Henderson- Rua," he said on Monday's edition of The MMA Hour. "It's great just to be in the talk. I always want to be talked about like that. I always want to be talked about as a guy who goes out, lays it on the line and puts on a great show. This wont be the last time people talk about my fights and how exciting they are. I've got a long career ahead of me. I'm glad the MMA world got to witness two great fights the same night."

Video: Watch Entire Michael Chandler vs. Eddie Alvarez Fight
Both bouts have quickly gained critical acclaim, but of the four fighters who competed in them, Chandler was by far the least known. A former collegiate wrestling All-American at the University of Missouri, he only began his pro fighting career in 2009, and entered the Bellator lightweight tournament in 2011, always with the belief that he would capture the belt.


Against Alvarez, he was more than a 2-to-1 underdog.

"That's the just confidence that I bring going into any fight," he said. "I don't care if it was Eddie or any of the other top lightweights in the world. I was going to have that confidence going in and feel that I could've beaten anybody. That's the confidence I bring."

Chandler almost got his win within the first 30 seconds, dropping Alvarez with a right hook against the cage just 13 seconds into the bout. But Alvarez persisted on and the match became a dogfight, with momentum shifting back and forth between them and neither able to take control.

In hindsight, Chandler says he's happy the fight wasn't stopped at that point since it led to an epic encounter. He also says that given Alvarez's past history of being dropped early in fights and coming back to win that he was nowhere closer to actually winning.

"He's a great competitor," he said "I knew I was going to have to try to finish the fight hard to finish him. I ended up finishing in the fourth, but he definitely recovered well and had a good next two rounds [after the first]."

As for where he stands now in the lightweight picture, Chandler isn't quite sure. He says that he does not follow the sport much and pays little attention to rankings. But he adds that Alvarez earned his top five ranking over the years, and that he doesn't expect to usurp Alvarez's spot just because he beat him. While he's happy to hold the title, he wants to work his way to a level where he can no longer be denied.

"I know that I'm the best myself because I know how hard I work and of course I see that everyday, but I definitely have not earned it," he said. "I don't even want people to consider me that yet until I go out there and beat the guys that I need to beat."

As for what's next for him, Chandler may wait for the next season's lightweight tourney to play out, or he could participate in a non-title fight. On that, he'll wait for direction from the Bellator brass. Until then, he'll continue controlling what only he can.

"I signed with Bellator for one reason, to win the world title," he said. "Now I have another goal, to defend it and just continue to get better."