Ronda Rousey on Miesha Tate: 'I Don't Think She's Better Than Me In Any Category' 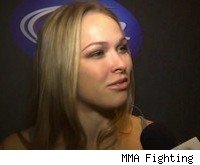 Ronda Rousey's ascent up the women's MMA rankings can literally be timed with a stopwatch. In four professional and three amateur fights, she is unbeaten, and has never required more than one minute to put an end to an opponent's night.

Her Friday night Strikeforce Challengers fight against Julia Budd lasted just 39 seconds, and like every one of her fights, it climaxed with an arm bar victory. Her abilities and charisma have forced the MMA world to take notice, and Rousey is angling to capitalize on the attention.

On Monday's edition of The MMA Hour, Rousey confirmed that she is considering a drop to bantamweight and hoping to match up with that division's champion, Miesha Tate.

Rousey said that while former champion Sarah Kaufman may have been promised a title shot, she would accept the chance to face her for the right to be the No. 1 contender. Or, if it was offered, she would fight Tate.


"Style-wise I think I would do the best against Miesha," she said. "I think that a very good striker that has very good footwork and deals with distance well would probably give me the most trouble. But I think a girl with a grappling style like Miesha would be perfect for me, because I don't think she's better than me in any category."

Any fighter with a grappling-based style would be at a disadvantage with her, she said. When asked by host Ariel Helwani if any female fighter could hang with her in terms of grappling, she was quick with her answer.

A 2008 judo Olympic bronze medalist, Rousey credited her early training for preparing her for the opportunities that are now coming her way. Her mother Ann Maria Rousey DeMars was a world-class judoka who won a world championship in 1984, and from an early age, Rousey was training. Among her daily drills: arm bars, by the dozens.

Having participated in the contact sport for most of her life, Rousey spent many of her early days training with stronger boys, and many of her current hours training with bigger men, a situation which she believes benefits her when competing against female fighters.

"I just think I lucked out having this background I do and having the right set of skills at this exact time," she said. "It's kind of like first-come, first-served with women's MMA right now. It's kind of like how it was with men's MMA at the beginning. If you happen to have the right skill set at the time it's getting big, you're going to do really well right away."

Rousey doesn't think she would have any trouble shifting down to the lower weight class, saying she usually walks around at 150 pounds without doing any dieting. To make the move, she plans on hiring a nutritionist.

And just because she's planning the move down doesn't mean there's not a chance she can't eventually match up with Cris Cyborg Santos. Rousey said that the marketing aspect of a fight with Tate could eventually help lead to that fight, and could also help women's MMA in general.

"I'm not dumb, you're not dumb," she said. "Really, if we push the 'hot chicks' to fight each other for a title, it's going to get a lot of attention. That's why I'd rather fight Miesha for a title instead of Sarah Kaufman. Because she's good looking and she's marketable. More marketable than the vast majority of the girls in women's MMA. I think that'd be a huge fight and it would lead to an eventual fight between me and Cris Cyborg being an even bigger deal. I'm just trying to figure out the right way to do things so us girl fighters have some job security a few years from now."