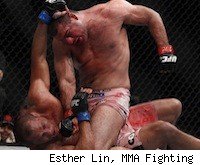 Seemingly on the verge of being finished twice before storming back and nearly forcing a draw in the UFC 139 main event, former UFC light-heavyweight champion Mauricio "Shogun" Rua showed a survivor's mentality on Saturday night. But by the time he left the octagon, Rua's face was marked up with cuts and disfigured by swelling.

Despite his appearance, the Brazilian fighter seems to have escaped serious injury in the war of attrition, passing a post-fight CT scan, his manager Eduardo Alonso told MMA Fighting on Monday.

"All was fine," Eduardo said in an email. "Only bruises and a cut on the eyebrow."

Facing heavy-handed slugger Dan Henderson, Rua fell behind early, trailing after dropping the first three rounds on all three judges' scorecards. But the proud fighter staged a frantic rally in the final two rounds, out-landing Henderson by a 112-17 count over the final 10 minutes to capture the final two frames. Rua spent the entire final round in the mount position, trying desperately to finish Henderson and close out what would have been an epic comeback. In the last round, he out-struck Henderson 79-8, but was not awarded a single 10-8 round despite the dominant stretch.

After the fight, neither Rua nor Henderson was able to attend the post-fight press conference, instead taking trips to a nearby hospital for precautionary tests.

Despite the loss which dropped him to 20-6, Rua can at least recover while consoling himself with the knowledge that most of the MMA world considers him one-half of the greatest fight the sport has ever witnessed.

"He will take a vacation and be back strong," Alonso said.