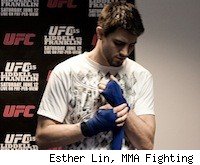 As expected, Carlos Condit won't sit around and wait for Georges St-Pierre and Nick Diaz to decide the direction of the UFC welterweight division.

Instead, Condit will face former No. 1 contender Josh Koscheck at UFC 143.

Koscheck announced the fight on his own, and a source confirmed that Condit has at least verbally agreed to take the bout.

Condit has been one of the winningest welterweights in MMA for years, capturing 12 of his last 13 fights, losing only a close split-decision to Martin Kampmann during that time. Condit has won four in a row overall, including three straight knockouts.

Condit (27-5) was at one time pushed ahead of Diaz and into a title bout with St-Pierre, but after Diaz defeated BJ Penn at UFC 137, St-Pierre asked for and received a change, and will fight Diaz at UFC 143.

If Condit wins, he's likely to be named No. 1 contender.

Meanwhile, Koscheck (16-5) returned from his December 2010 loss at the hands of St-Pierre to knock out Matt Hughes in the first round of their UFC 135 fight.