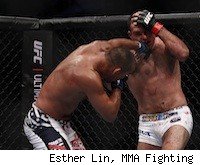 Among the MMA media who log serious frequent flier miles following the UFC around the country all year, it takes something major to jar them out of the vague sense that fight night is another day at the office.

That's not to say that even the most grizzled road warriors on press row aren't appreciative of having a job they love following a sport they're passionate about, but when you start to hear the UFC's in-arena playlist in your sleep (damn you, techno remix of "Hotel California"!), some of the action can start to feel routine.

Then you get an event like UFC 139, which ended with quite possibly the best fight any of us had ever seen. As Dan Henderson and "Shogun" Rua battled back and forth for five rounds, a sense of baffled astonishment set in. It's that rare moment where you realize you're witnessing something amazing, even as that something is still happening. You could look at the faces of the fans in the arena and picture them preparing to tell their grandchildren about this night decades from now.

Afterwards, I tried to compare scorecards with ESPN writer (and fellow University of Montana alum -- go Griz) Chad Dundas. Personally, I had the fight a draw, but you could make case for almost any result, and I was curious how Chad scored it.

Two things about that: 1) It's a good thing he isn't an actual judge, because the phrase, "Judge Chad Dundas scores the bout awesome," probably wouldn't go over well with any commission (well, maybe Texas wouldn't care), and 2) I can't disagree. That fight was awesome, and it almost doesn't matter who got the official nod from the judges at the end.

Some more fight night musings, scribbled from 35,000 feet and culled from a brain suffering from severe sleep-deprivation:

- Hendo will likely get a title shot soon, but in which division? Dana White said he was open to letting Henderson challenge for a belt at either middleweight or light heavyweight, depending on which one is available first. The thing about that is, Henderson has made it very clear that he doesn't want to be a 185-pounder full-time. Even if he won the belt, he told us earlier this week, he might not stick around to defend it. He simply hates the weight cut that much. Don't tell that to White, however, who said that if Hendo did beat Anderson Silva, a rubber match would only make sense.

"I think Hendo would go back down [to 185 pounds] for that too," said the UFC prez. "I think these guys will go wherever the big money fights are."

In other words, White's betting that Henderson likes money more than he hates dieting. He might have a point.

- Even though both the UFC middleweight and light heavyweight champs have contenders in line to face them, don't assume that those match-ups are set in stone. Henderson tweeted from the hospital that he was suffering only from a sprained thumb, which seems almost impossible to believe, but might mean that he won't need as much time off as you'd expect after a fight like that. That could be important if the UFC finds itself suddenly in need of his services. Talking with UFC matchmaker Joe Silva before the event, he claimed that he'd gone back and crunched the numbers for this year and was slightly amazed to discover that about half his original main events in 2011 had been altered or scuttled entirely by injuries. He seemed to think that the intensity of the sparring in many gyms was to blame, but regardless of the cause, it makes you think twice about assuming that any title shot promises are truly guaranteed. An injury to the champ or the challenger, and the picture could change in a hurry. The show must go on, after all.

- Wanderlei Silva's win doesn't automatically extend the life of his career indefinitely. Even with the dramatic TKO victory over Cung Le, White didn't seem like he was at all ready to retract his previous statements about wanting to see Silva hang it up. When the knockouts start piling up, he said, it's time to go -- regardless of whether you can still win one here or there.

"People can disagree with me or whatever. Go start your own organization. I'm not doing it," he added.

As for how Silva will take that message, White sounded an optimistic tone, saying "I think he gets it. It's pretty clear. I've been very open and honest about it."

So has Silva, and he doesn't sound like a man who's ready for the rocking chair just yet. File this little battle under 'To be continued.'

- If you think the UFC schedule is crazy now, just wait. White had to sit out from some of the pre-UFC 139 media responsibilities because he was just so worn down after the stress of the first FOX show, which is understandable. But after this emotionally-draining night in San Jose, the UFC is back in Vegas in two weeks, then Toronto the week after that, then Vegas again for the end of the year. In 2012, with the FOX deal starting up and 'The Ultimate Fighter' going live, things really get insane.

"The schedule is looking ugly, man. Especially for me," White admitted. "There's 26 weeks alone of live television. 26 weeks of live television, every Friday night ends in a live fight, then I have to jump on a plane and fly to wherever we are on Saturday, then start all over again on Monday."

That's a travel schedule that even pro wrestlers and Rolling Stones roadies would wince at, and it already appears to be taking a toll on White. What will become of the organization if he runs himself into the ground? He doesn't sound too worried about it.

- I'm not sure how the UFC so consistently manages to position press row so near to each arena's foremost striking expert, but it does. This time, media members were treated to several hours worth of one ticket-holding genius shouting for the "2-4" combination. He must have thought it was a flawless attack, since he offered the same advice to nearly every fighter, from Nick Pace to Wanderlei Silva to Dan Henderson. None of them listened to him, of course, but that didn't dampen his enthusiasm any. A note to those of you who plan on attending a live event: it's not a damn Lynyrd Skynyrd concert, people. The fighters are not taking your requests, no matter how loudly you shout the MMA equivalent of 'play Free Bird!' at them.

- Anybody complaining about an early stoppage in the Cung Le-Silva fight obviously didn't see Le's face as he made his way to the locker room. Remember how badly his nose was smashed at the end of his first bout with Scott Smith? It was a lot like that, only with more assorted lumps about the rest of his face to accompany it. You could tell by the way he lunged for that desperate takedown attempt: Le was done. Even if he could have gone on a few more seconds, better to stop it just a tad too soon than to let it go on a punch too far.

- Urijah Faber is more willing than ever to be Dominick Cruz's bantamweight nemesis. Before their rematch, he was somewhat reluctant to assume that mantle. Now that he's had some time to stew on that decision loss, however, he's all about the rivalry. Not only did he call out Cruz in his post-fight remarks, telling him to "throw some gel in that widow's peak," but he later insisted that Cruz's narrow win didn't prove him to be the better fighter, hence the need for a rubber match.

"We'll find out who's the man for the rest of our lives," Faber said. "That's important to me."

- Ronda Rousey got the UFC president's attention with her grisly armbar win at Strikeforce: Challengers. White actually referenced the nasty ending to that fight when lambasting the referee in the Chris Weidman-Tom Lawlor fight for being slow to step in. Weidman claimed he didn't blame the ref for not believing him that Lawlor had been choked unconscious since "I could be trying to get a cheap victory with that," for all the ref knew. White disagreed:

"I blame him. I do. You're referee. You should know when somebody's out. Get your ass in there and stop the fight. Same thing with the armbar last night in Las Vegas. ...I blame him. 100 percent."

Okay, so he didn't call out Rousey by name, but we all know who he's talking about. Just getting him to admit to watching a women's MMA fight is a step in the right direction, even if he later insisted that his general feeling on the lack of depth in the women's division is a deal-breaker for him. Baby steps.

- UFC headed to Sao Paulo in June? Magic Eight Ball says, 'Outlook good.' I was reluctant to believe White's claim that Brazil is "our new Canada," but the regular presence of Brazilian media members at UFC fights lately makes me think otherwise. One Brazilian reporter quizzed White about a newspaper report that the organization was headed for Sao Paulo in June -- a question that clearly caught White off-guard.

"How's this stuff get out?" he said, before changing gears and trying to play it coy, yet gleefully unsubtle. "I don't know if we're going to Sao Paulo in June, and if Anderson Silva's headlining the card. No clue. That would be awesome, though."

- Unsolicited travel tip: When you realize that you didn't pack enough underwear for your excessively long road trip spanning back-to-back MMA events, think twice about trying to wash a pair in your hotel room's bathroom sink. It takes longer to dry than you'd think, and attempting to wear them while still even a little bit damp will be a decision you immediately regret.