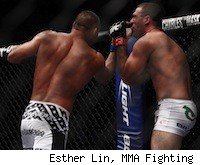 The UFC's Fight of the Year might not have even been MMA's Fight of the Night. That's how good last night was in the MMA world. Separated by a few hours and a few thousand miles, Bellator's Michael Chandler and Eddie Alvarez and the UFC's Dan Henderson and Mauricio "Shogun" Rua staged two of the sport's all-time epic fights.

In the former, Chandler upset Alvarez in a rollicking, explosive fourth-round submission win; in the latter Henderson outlasted Rua in an ferocious war of attrition.

"It was the greatest fight I've ever seen" UFC president Dana White said of his veteran battle.

Somehow, they were both right.

Let's start with Henderson-Rua, since there's no doubt it was watched by more viewers.

If last weekend's UFC on FOX was about spreading the MMA gospel, UFC 139 was about the sport in its purest form of competition. The event itself was always in the shadows of its network cousin, with promotion minimized due to the UFC's expiring contract with Spike. But when it came time to fight, Henderson and Rua conducted a symphony of violence that surpassed any fight to take place in the UFC's octagon this year.

"Without a doubt, it was one of the top three fights ever in MMA," White said afterward.

By the time it was over, both competitors were a mess. Rua was bleeding from near his puffy left eye, his bottom lip was swollen, his once-white shorts were stained pink with drying blood. Aside from a knot on the left side of his head, Henderson's face was not quite as marked up, but in his post-fight interview with Joe Rogan, he draped his arm over Rogan's shoulders, either unable or unwilling to stand on his own power. Henderson also needed help walking backstage. Both men skipped the post-fight press conference to visit a local hospital for observation.

It was the kind of fight that shortens careers, which granted, sounds a bit ridiculous in regards to Henderson since he's 41 years old. The hammer-fisted Californian nearly knocked out Rua on at least two occasions.

"That guy can take an f'n punch," Henderson said. It was certainly true, and it also applied to him. According to FightMetric, Rua landed an astonishing 161 head shots -- and lost.

It was a level of violence that might not have been easily palatable to a network audience. While Velasquez-dos Santos ended with a knockout, it was clean, fast and simple. There wasn't a lot of time to digest what was happening.

On the other hand, Henderson-Rua was a physical grind, a war of attrition that seemed on the verge of a fight-ending explosion at any moment, from either side. If you are the type to squirm or shriek at the moments when a fighter is on the verge of being finished, this wasn't the fight for you. There was a lot of that, nearly every round, it seemed.

Newcomers to the sport may have been blown away or turn off. There probably would have been no in between. But for those of us who watch regularly, it was a perfect example of why we watch.

It wasn't that it was a display of perfect technique or MMA fundamentals, but it was a primal battle of wills. Both fighters refused to be put away in situations where lesser fighters would have wilted. Momentum shifted often and unpredictably.

For Rua, it came exactly two fights after his light-heavyweight title loss to Jon Jones, in which he received some criticism for his performance. If there were any questions about his durability or heart, they were answered even in defeat. And for Henderson, he is constantly combating the question of age. It's only fair to wonder how much longer he can keep doing it, and yet here he is in his early 40s with a four-fight win streak and knocking on the door for a title shot.

The Chandler-Alvarez fight was every bit as exciting. Alvarez was nearly knocked out in the first, only to roar back in a fight that quickly began to take on a see-saw affect with all the momentum changes. By the end of the third, both fighters' faces were covered in blood.

Chandler appeared to be fading, and the champion seemed to be taking control in the fourth until Chandler landed a fight-changer, a straight right hand that floored Alvarez. Seemingly recharged, Chandler pounced on top of Alvarez, rained blows and sunk in a fight-ending rear naked choke with Alvarez gave his back.

Say what you will about Bellator being a rung below the UFC in talent pool -- and many will point that out -- but the fight was contested at a high level of technical proficiency and like Rua-Henderson, showcased the gutsy efforts that matter to most fans as much as winning and losing.

Maybe these fights were one week late in coming. Or maybe it's best that they were left to us, the smaller, more loyal audience that helped the sport get this far, as a sort of "thank you." There is a certain school of thought out there that once things go mainstream, they are never quite the same. It gets watered down, or played out.

That's not always true of course. Most of the time, it's not the same simply because it's not "yours" anymore. It's not the same when you don't have an inside secret. But why would we want to keep this secret? Either fight would have served the sport well in front of a nation's eyeballs. MMA may be easier served up in 64-second knockouts, but eventually the bandage will have to be ripped off and they'll have to learn just how beautiful the right kind of violence can be.