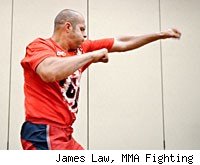 For the first time in more than two years, Fedor Emelianenko has won a fight.

Fedor, the heavyweight who was among the best MMA fighters in the world for most of the last decade, snapped his three-fight losing streak with an easy unanimous decision victory over Jeff Monson at an M-1 Global event in Moscow on Sunday.

The fight wasn't much of a competition at all: Fedor battered Monson with punches and leg kicks, and Monson repeatedly failed in his efforts to take the fight to the ground. Fedor didn't look great, but he did look a whole lot better than Monson.

The victory was Fedor's first since he beat Brett Rogers on November 7, 2009.

Fedor landed some good punches in the early going, and when Monson tried to close the distance and secure a takedown, Fedor easily backed away. After three minutes of tentative fighting, Monson did succeed in pulling Fedor to the ground, but all he was able to do was pull Fedor on top of him, and Fedor easily got back up. After another minute of tentative stand-up action, Fedor knocked Monson down with a hard punch, and although Fedor looked hesitant to engage with Monson on the ground, it was a first round that Fedor easily won.

In the second round Fedor picked up right where he left off, knocking Monson down with a punch just 15 seconds into the round. Fedor decided not to follow Monson to the ground, however, showing the respect for Monson's submission game that Fedor didn't show in his loss to Fabricio Werdum. As the second round wore on, it became clear that Monson's only real game plan was to go to the ground and hope Fedor would follow him there, and Fedor continually refused to play into Monson's ploy. That made it a fairly dull round, but another round that Fedor won easily.

By the third round Monson didn't have anything left, as Fedor had been battering him with punches and leg kicks, and it was all Monson could do to stand up and go for some weak takedown attempts that Fedor easily shrugged off. Midway through the third round Fedor had hit Monson in the face so many times that Monson's mouth was spewing blood, and the referee called time to have the cut examined. Monson was allowed to continue, but he didn't have any fight left in him, and Fedor easily took the decision.

So does this mean Fedor is back? Not really. Emelianenko weighed in at 238 pounds, 15 more than he weighed for his loss to Dan Henderson four months ago, and he was noticeably flabbier around the midsection. He didn't look any better for this fight than he did for any of the three Strikeforce fights he lost -- he was just fighting an easier opponent.

Although Fedor's last win was seen by millions of American fans on CBS, this win was likely seen by only a few thousand fans on pay-per-view. The Integrated Sports broadcast of the fight left a lot to be desired: The cameras sometimes seemed out of place, the audio cut out and replays failed to show the key elements of the fight. Worst of all, announcer Benny Riccardo repeatedly pronounced "Fedor Emelianenko" incorrectly, getting both the first and last name of the headline fighter wrong.

But while the handful of American fans who woke up early and bought the pay-per-view weren't treated to a first-class broadcast, Fedor did seem to get an enthusiastic reception from the Russian fans in the arena. According to M-1 Global, 22,000 people attended the fight at Olympic Stadium in Moscow. Vladimir Putin walked into the ring afterward to congratulate Fedor, and the local fans seemed to love Emelianenko. Fedor is a winner and a hero back home, even if he's no longer one of the elite fighters in MMA.