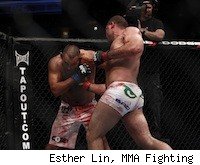 SAN JOSE, Calif. -- Five rounds of bloody, back-and-forth action. That's what UFC president Dana White got out of Dan Henderson and Mauricio "Shogun" Rua at UFC 139, and what he must have hoped he would get out of Junior dos Santos and Cain Velasquez for the UFC's FOX debut last weekend, right?

Not so fast, said White, who admitted that while the 64-second heavyweight scrap on FOX didn't offer much chance to build up the ratings, a brutal 25-minute fight like the UFC 139 main event would have had some negative consequences for the organization's network debut.

"If you could have like a [Rua-Henderson] type fight on TV, I mean, imagine what the [ratings] number would get to," White said. "But that's not the fight you want for your first time on network television."

With a peak of 8.8 million viewers, White has reason to be pleased with the first FOX offering. Following the UFC 139 press conference he confirmed rumors that he celebrated the ratings milestone by leaping up on a table in the UFC offices and sending all his employees home early.

"I hear all kinds of rumors about, oh, I heard he was flipping out after the fight and all this [expletive]," White said. "No, I wasn't flipping out and yes, I did jump on a table and send everybody home. I was pretty excited."

But as much as hardcore fans might have liked to see something on par with the Henderson-Rua scrap on network TV, White suggested it might have been too violent for mainstream FOX viewers to handle right off the bat.

"I said it before and I'll say it again: if I could go back in a time machine and do the FOX fight over again, it would be done the same exact way. Exactly the same way. The hardcores can bitch about that fight, I could care less what they think about that fight. I don't care. And people are like, 'Oh, you don't care what the fans think?' No, I do not care what you think. That fight had to go the way that it went because none of you guys understands what goes on behind the scenes. If that fight that happened tonight went on FOX for the first time ever, let me tell you what, I would not be having a good time these last five or six days."

That's because, White said, the UFC is "still in the education process" when it comes to introducing mainstream sports fans to his product. Even with the quick, bloodless debut, White said there were still opponents who didn't want it on network TV.

"These people come out of nowhere, attacking this sport, literally saying that it should go away, that we shut down the UFC and this thing should go away," said White. "That's realistic. But those are the kind of people that come after you. It's crazy."

But as White has been repeating ever since the FOX debut, the UFC still needs to "ease into" the mainstream rather than charging in with a bloody battle like Henderson-Rua, which might be hard for the uninitiated viewer to stomach. Just don't expect that easing process to last very long, according to the UFC president.

"In my opinion, we eased into it already. We did it, we put the first fight on FOX, now we're going with four fights. And the more fights you do, the more chance you have to have one of these."

In theory, maybe. In practice, you could put on MMA fights for years and not see anything like what Hendo and Rua produced on Saturday night. That's what makes it so special, whether the mainstream viewer is ready for it or not.