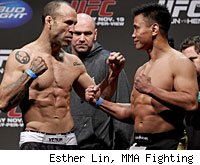 The UFC 139 start time for the pay-per-view will be at 9 p.m. ET. The main event, a five-round fight between Shogun Rua and Dan Henderson, is expected to start around 11 p.m. ET.

The first five fights of the seven-fight undercard will be featured on UFC's Facebook at 6 p.m. ET. Ryan Bader vs. Jason Brilz and Michael McDonald and Alex Soto are the fights featured on SPIKE at 8 p.m. ET.