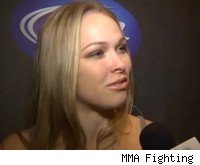 Rousey's ground game is simply on a different level from Budd -- and from just about every other woman in the world -- and it didn't take her long to establish that: As soon as she got Budd down, Rousey effortlessly transitioned into mount, then cranked on Budd's arm and forced her to tap.

"I got tagged a couple more times than I would like to, but I'm stoked," Rousey said afterward.

Rousey is now 4-0 in her professional MMA career, with all four wins coming by first-round arm bar in less than a minute. Rousey could be a good future opponent for Strikeforce 145-pound champion Cris Cyborg, but she said after the fight that she'd rather move down to 135 pounds and fight for the title there.

"I really want to have a title shot at Miesha Tate," Rousey said.

Whatever weight class she's fighting in, Rousey is a force. She has the potential to be a great crossover star for women's MMA.

In other Strikeforce Challengers action:

-- Lumumba Sayers needed just 28 seconds to knock out Antwain Britt, pummeling Britt with hard punches against the cage and finishing him off with a devastating uppercut.

-- Adlan Amagov got a highlight-reel knockout of Anthony Smith in the first round, swinging wildly and connecting with a huge overhand right and then finishing him off with four more bombs on the ground. The always exciting Amagov is now 9-1-1 in his MMA career.

-- Trevor Smith submitted T.J. Cook with a guillotine choke in the first round. Smith put on a solid showing and improved his pro record to 9-1, with eight of his nine wins coming by submission.

-- Derek Brunson beat Nate James by unanimous decision, 30-27 on all three judges' scorecards, in a fairly dull battle to get the Showtime televised card started.