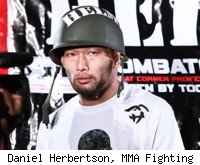 To close out DREAM's World Bantamweight Grand Prix, Bibiano Fernandes will face Antonio Banuelos, while Masakazu Imanari will fight Rodolfo Marques on the Dec. 31 "Genki Desu Ka!!" (How are you?) card in Saitama, Japan.

Fernandes, Baneulos, Imanari and Marques were all victorious in opening round bouts at DREAM.17 in September to advance to the semifinals. The winners of the semifinals will meet the same night on Dec. 31 to determine the Grand Prix champion.

Former DREAM Featherweight GP winner and titleholder Fernandes (9-3) is coming off a win against Takafumi Otsuka via rear-naked choke. Marques (14-1) out of Brazil's Nova Uniao advanced with a unanimous decision win over Yusup Saadulaev.

Leglock specialist Imanari (24-9-2) has been one of the most active fighters in Japanese MMA in 2011. He's 3-2 this year with wins over Abel Cullum, Kenji Osawa and Keisuke Fujiwara and loses to Hideo Tokoro and Hiroshi Nakamura. Banuelos (19-7) made his UFC debut in February in a losing effort against Miguel Torres and then bounced back with a win over Hideo Tokoro at DREAM.17.

Event promoters also announced Friday the addition of Hayato "Mach" Sakurai vs. Ryo Chonan to the card.
Sakurai (35-12-2) will be in search of his first win since knocking out Shinya Aoki back at DREAM.8 in April 2009. The former UFC title contender last competed last New Year's Eve in a loss to Jason High. He was booked to fight at DREAM.17 but bowed out due to injury. Chonan (20-12), best known for a submission win over Anderson Silva, won both his fights in 2011 fighting under the DEEP banner.

The final "Genki Desu Ka!!" card will be a mix of MMA, kickboxing and pro wrestling matches.