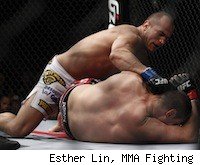 The UFC's second outing on FOX will land in Chicago, UFC president Dana White confirmed to MMA Fighting on Thursday.

In an interview with Ariel Helwani, White said that the event will take place on January 28. Although he didn't specify the venue, it is expected to take place at the United Center.

White said he is expecting to put together a four-fight main card, and has several fights in mind, but would not divulge any details until speaking with his FOX partners on Monday. He said that he is not expecting to include a championship fight on the card.

The event will mark the UFC's first time in Illinois since UFC 90 in October 2008.

The addition means that the promotion will produce four events in four weeks spanning from January 14 to February 4. In addition to the UFC on FOX show, the stretch includes UFC 142 in Rio de Janeiro, Brazil, UFC on FX in Nashville, and UFC 143 in Las Vegas.

The UFC's first foray on to network television was last Saturday, with an event that drew an average of 5.7 million viewers and a peak of 8.8 million to watch Junior dos Santos knock out Cain Velasquez to capture the heavyweight championship.