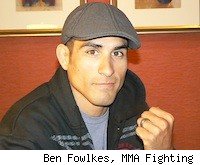 SAN JOSE, Calif. -- Alex Soto still isn't completely sure what went wrong in his Ultimate Fighter audition. At the time it seemed like he'd done everything right.

"I went there, tried out, did everything good," he said. "I grappled in front of Dana White, Joe Silva, and made it to the next phase, hitting the mitts. I made it all the way to the interview process, but I never heard anything back."

Maybe it was the interview, he thought later. He was in the middle of a weight cut for a fight he had later that same week, so maybe his personality didn't shine the way it could have. Then again, Soto's coach, Manny Hernandez, has his own theory.

"It was the beard," said Hernandez.

To hear Hernandez tell it, this wasn't just some scruff from a few days of not shaving. It started just below Soto's eyes and only got worse from there.

"Me, his manager, his coaches, we all said, 'What's with the beard, Teen Wolf?'"

Okay, Soto can admit now, the beard didn't help. That's part of why he shaved it. But even though he didn't make it on TUF, things worked out when the UFC needed a late replacement to take on Michael McDonald at UFC 139 and Soto just happened to be in top shape since he was already preparing for a local fight on that same night. Even on 12 days' notice, he couldn't turn down the chance to get in the UFC.

Now Soto finds himself facing one of the organization's top young bantamweight talents on the Spike TV prelim portion of the card, and the UFC officially has its first professional dolphin trainer under contract.

In addition to his MMA career, Soto currently works for the U.S. Navy training dolphins. It's a career path he got into after working as a diver at Sea World, where he initially cleaned tanks. When the park was looking for an employee adventurous enough to get in the water and work with the animals, it found one in Soto, who's always up for a thrill.

For instance, consider his early experiences with MMA. After taking what he thought would be a pretty standard bout in Tijuana, with gloves and shinpads for extra protection, he got word that, actually, not everybody had shinpads. Or gloves, for that matter. And oh yeah, this bare-knuckle fight was in a nightclub.

"So turns out it was just a straight-up brawl," said Soto. "It was a great experience. I don't think I'd do it again, but it was a great way to start my career."

For the 27-year-old Soto, that trip to Tijuana was actually something of a homecoming. He was born in the border town, and lived there until he was 12, when his family immigrated to the U.S.

Soto was in high school during the terrorist attack on 9/11, and that event made him feel like he had to do something to defend his adopted homeland, he said. So right out of high school he joined the Army. Before he knew it, he was shipping off to Afghanistan.

"I remember how I felt on 9/11," said Soto. "It was a scary feeling. It was, you know, terrorizing. And that's what I thought about when I went to Afghanistan was, the way that I felt that day, I want to do something about it."

Soto was deployed with the 25th Infantry's Long-Range Surveillance Detachment -- a special unit that he was motivated to join largely because it was supposed to be difficult to get into.

"I'm always looking for adventure," he explained. "It was a tryout where they put us through hell for about three months, and I made the team."

When Soto came back home, he began to turn his focus toward an MMA career with the help of Hernandez and the rest of San Diego's Team Hurricane Awesome. That puts him in regular sparring sessions with Strikeforce 135-pounder Liz Carmouche, who Soto jokes is just one of the bigger fighters he has to face on a regular basis, now that she's "put on a few pounds" between fights.

He'll need the benefit of those training sessions against McDonald, who at just 20 years old is considered to be one of the UFC's future stars at bantamweight. Maybe it's his status as a rising contender, or maybe it's the fact that Soto took the fight on less than two weeks' notice, but oddsmakers seem to like McDonald's chances, tabbing him a 5-1 favorite on Saturday night.

That's alright with Soto, and with Hernandez, who said he was "ecstatic" when his fighter got the call for what many expect to be a rough entrance into the UFC.

"Whatever's meant to happen will happen," said Hernandez, who recounted telling Soto when he first joined the gym that he could go as far with MMA as he wanted to. Soto still remembers that day well, he said. At least so far, Hernandez's words have proved true. After all, he did start out in a bare-knuckle fight in a Tijuana nightclub.

"Now I'm here in the UFC," Soto said. "The biggest stage in the world."

From Afghanistan to the dolphin tank, Soto's already led an uncommonly interestingly life. Now the next chapter is set to begin on live TV. Whatever happens, at least this time an ill-advised beard won't be to blame.