Wanderlei Silva Isn't Ready to Go Now, but Will He Ever Be? 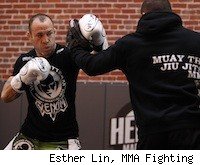 SAN JOSE, Calif. -- The old Wanderlei Silva is still in there somewhere. You know he is. You catch glimpses, like the shadow of the famous tattoo on the back of his head, now just barely showing through his hair. You see his old face lurking there just beneath the taut mask of his new one, and you know.

He knows you, too. Better than you think. He knows what you've been saying about him. He knows you wanted him to quit after he got knocked out by Chris Leben in his last fight. He also knows you said it out of love and a genuine sense of compassion, and he's not mad at you, even if you just don't get it.

"After that last fight," Silva said, "it's normal."

In other words, when he gets knocked out he fully expects the criticism and the retirement talk to start up again. But he's not ready to go just yet, no matter what you or Dana White or even his peers say about it.

Ask Silva why he's still getting in the cage at 35, now that he doesn't need the fame or the money anymore, and he'll tell you that it's simple: he just wants to show us all that he can still fight.

And the knockouts? The increasing frequency with which he's ended his nights asleep on the mat? The fights he has no memory of beyond one or two good blows? He takes worse than that in sparring, he said, as if that's supposed to be somehow encouraging. Besides, the doctors look at him before and after every fight, and they tell him his brain is fine, he insisted.

"I think the punches make me more smart," he joked. "They shake my head up."

But it's not a laughing matter to anyone else. Not to UFC president Dana White, who says he could still make money by putting weathered old fighters like Silva and Chuck Liddell into one brain-damaging brawl after another at the end of their careers, but "I don't want to make one dollar of that kind of money."

Not to former foe Dan Henderson, who himself added to Silva's knockout total when he starched him back in 2007 -- the second outright KO he'd suffered in a year's time inside the Pride ring.

"I think his ability to take a punch has gone down," Henderson said of Silva at Wednesday's open workouts. "His chin isn't there anymore, and with his style it's not conducive to winning fights if you're going to go out there and bang with guys and you can't take a punch. It's unfortunate. I was a big fan of his as well, and I loved watching him fight. But that happens I think to a lot of guys with that style -- Chuck [Liddell] is the same way, that's his style too. There just comes a time when you've got to realize that."

Even Cung Le, Silva's opponent at UFC 139 on Saturday night, agreed that the hits have taken their toll on "The Axe Murderer."

"It's true. You take a lot of damage and it adds up," said Le. "But I don't know. Some fighters, they pull another fight out of their back pocket and they rise to the occasion."

Obviously, that's what Silva is hoping for on Saturday night, but his aspirations don't end there. His fans might be hoping that he can win one last battle and then ride off into the sunset, but he's not. To hear him tell it, he's nowhere near done -- and that's the scary part.

"My dream is, I start my career right now, because right now is another moment in this sport," said Silva. "This sport is so big. I hope I'm still fighting for a couple more years."

And sure, he's had a great run. From when he first knocked out a teenage Muay Thai champion in a tournament in Brazil when he was 15, to the wars he waged in the Pride ring, he's been to the mountaintop and back several times by now. Can't he just be content with that, people wonder. Doesn't he know that he has nothing left to prove in this sport?

The answer seems to be: not really. Because the people who make that claim are usually the same people who, with their very next breath, tell him he can't do this anymore. And that's what he's trying to prove, Silva said. That those people are wrong. That he has not just one good fight, but several left in him.

"I have a great career," he said. "I fought with the best guys in the world. I feel good about what I did in the past, but I know I can do better. I can still fight. I can be competitive right now."

And if he can't? If he steps into the cage with Le and ends up watching the ending on a big screen after the fact? What then?

Don't expect him to doff his cap and announce that he's had enough. Within the Silva camp, no one appears to be even considering that option. Of course, they assume he's going to win, but even if he doesn't get 'em this time, he'll get 'em next time, said longtime trainer Rafael Cordeiro.

"His last fight, he was ready. He was. But now, I think it's Wanderlei's moment."

This is part of the problem. Because you can't simultaneously prepare for victory while also preparing for the consequences of defeat. And after spending your entire adult life pursuing one goal, you can't give it up just because of one bad night. If you were the kind of person who could do that, you'd never have gotten here in the first place.

But the end is coming, as it comes for every fighter. Somewhere in that brain that has, by Silva's reckoning, benefited from one good shaking after another, he knows this. He's just doesn't see any reason why the end has to come right now. Not that he'll be any more ready in six months, or maybe even a year. Which makes you wonder: what's it going to take? How will he recognize the end for what it is?

"Good question," he said, after a pause. "In the moment, we're going to know."

And sometimes, sure, that's the way it works. You see the exit coming and you know when to get off. Other times you find out later, when you see it in the rearview mirror. Then it only gets farther and farther away as you plow forward, trying to make up your mind about what to do next.