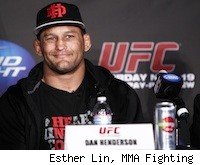 SAN FRANCISCO -- Maybe someone should tell Dan Henderson that he's about to headline one of the better UFC pay-per-views of 2011.

While they're at it, maybe they should also tell him that the match-up is kind of a big deal to the fans who always wanted to see Henderson and Mauricio "Shogun" Rua mix it up back when they were both in Japan's Pride organization, and if he wins there just might be a title shot in it for him.

Not that I expect it would make much of a difference to him, nor would it generate any outward displays of enthusiasm, but it might be nice just to know that he knows it.

If you weren't already used to his sleepy pre-fight demeanor, you might have been forgiven for mistaking his laconic performance at the UFC 139 press conference on Thursday afternoon for disinterest.

Again though, that's only if you didn't know the guy. It's only if you weren't familiar enough with his sense of humor to recognize that, when asked about the differences between training for a three-round fight and a five-round fight, he was just trying to have a little fun by replying, "The difference is two rounds."

You'd also have to know him well enough to know that, when he deflected talk about getting back into a title shot, suggesting that the winner of his fight with Rua might not be deserving of a crack at the champ if it ends up being "a boring fight and not a whole lot happens," he wasn't trying to be difficult so much as honest.

After all, this is the same man who, at Wednesday's open workouts, insisted that he'd never actually been all that passionate about pursuing a rematch with middleweight champ Anderson Silva, and that, sure, he wouldn't mind winning a UFC title, since that was "definitely on the goal list."

Maybe that's just what happens when you're a 41-year-old fighter with more than 14 years in the sport, and you've won big fights in every major organization. Maybe you show up to press conferences in a little conference room on the edge of the San Francisco Bay, and you still can't get too terribly worked up about the man you're about to fight in a cage just two days from now.

Fortunately for us, UFC bantamweight Urijah Faber was there to tell us a story about Hendo -- a story that told us more about Hendo than Hendo would likely ever tell us about himself.

As Faber told it, he was a former wrestler in his first couple weeks of MMA training, and he ended up on the mat with Henderson during a training session in a Sacramento gym.

"I was just going in there, going for the kill, and of course I went against a guy who's another great wrestler and bigger and more experienced and everything and he was just killing me and he was like, 'Man, don't you know any jiu-jitsu?'"

The answer, Faber said, was "not really," which only earned him a shaming from Henderson, who pointed out that another smaller fighter, Javier Vazquez, was able to hang with him thanks to his jiu-jitsu skills. The message was clear enough to Faber, who said he also started asking around about Henderson's training regimen because "I was trying to get a feel for how the best guys did things."

"I was asking his training partner how much he runs, and he said, 'Dan hasn't ran in 13 years,'" Faber said, before recounting a story about the year Henderson spent "partying" instead of training, only to then enter and win a national wrestling tournament.

"This guy's a unique cat," said Faber. "He's like a pirate or something."

Here's where you naturally pan to Henderson himself, looking for a reaction, briefly forgetting who you're dealing with.

"I guess I got no comment about that," he replied.

Of course not. Why would he? When you've got exploits like Henderson's, both in the cage and out, you don't have to talk about them. You can let others do it for you.