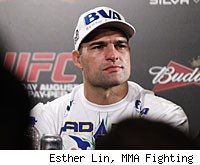 At the pre-fight press conference, the fighters will meet the media and address some of the issues leading up to this fight card, including Henderson and Le leaving Strikeforce for the UFC, Rua and Silva trying to bounce back after losses, and Faber and Bowles possibly competing for the role of No. 1 contender in the bantamweight division.

The press conference begins at 4 p.m. ET and the video is below.