Of Critics & Ratings: The Banes of MMA Fandom 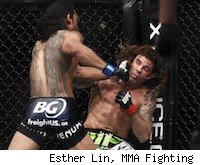 Last Saturday night brought it all to a head. UFC was finally coming to free network television. Millions would watch. Millions would learn. A sport that we love would put its best foot forward, and the stigmas that have plagued it for years would start to fade away. At least that's how it was supposed to be.

By Sunday morning though, there was panic spreading. The early ratings had returned, and they weren't great. Just 4.6 million viewers was the estimate, a number below expectations. The hand-wringing started, and defensive instincts kicked in.

It had only been a one-minute fight. The UFC made a huge mistake in only airing one match. The one-hour time was an unfair window. These were all common themes on that morning, and it all reeked of an inferiority complex undeserving of the big platform we had just been handed.

Even before the revised ratings were released and indicated an average audience of 5.7 million and a peak of 8.8 million, the truth was that the stress that comes along with criticism and ratings is mostly wasted energy.

Let's all remember that the deal between UFC and FOX is for seven years. Imagine having your future set for that long. That's a pretty secure feeling. That's a lot of time to establish a new brand, and make no mistake, FOX realizes that there is still work to be done. This isn't the NFL with a 90-year history, or baseball, with well over 100 years behind it. This is the latest sport to wedge its way into the American sports palate.

It's one thing for UFC president Dana White to be stressed about it. This is his business, and it's one he treats like another child, he loves it so much. To carry that human analogy further, it was one that he was told would die, that it was just a matter of time. But he loved it, cared for it, spared no expense and no energy to nurse it back to health. He is invested in it every way, personally, financially, even physically, if you've seen his schedule.

For others, it's a bit more perplexing. In no other sport is so much stock put into things like ratings and criticsm. So there are still people who don't like MMA? Who cares? We don't have to try to convert every living soul walking the earth. And we don't have to shoot down every voice who disagrees with us.

Early Thursday morning, for example, The Washington Post, which is one of the most circulated and influential newspapers in the country, ran a column by a writer named Fred Bowen, which was headlined, "Ultimate Fighting is too brutal to be considered a sport, even if it's on TV."

I probably know about as much about him as he does about MMA, which is to say, not much at all. A quick Google search shows that he is a sports fiction author for kids, and his column is also geared towards children. Every parent should determine whether their own child watches MMA. I wouldn't disagree with him on that. But the rest of his opinion, is quite simply that: his own opinion. Like where he claims that "ultimate fighting is not safer than cheerleading," even though a recent report by the National Association for Catastrophic Sports Injury research showed that cheerleading was the most dangerous sport in the nation.

But in the end, his is just another among the voices who have tried to drown out the sport in recent times. I can guarantee that by the end of the day, the MMA mafia will unload on him in the comments, and some will write things that don't represent the sport's followers in a respectful manner, and a potential dialogue will be lost to a flame war. In some ways, it doesn't matter. For him and others, it's probably too late. Here's the thing: they all had the chance to kill off MMA back in the late '90s and early 2000s and couldn't do it. The sport was on its deathbed, they applied a pillow to its face, and couldn't snuff it out. Now it's a movement. It's not just popular here but in places far and wide.

The fact that 8.8 million people were watching the bout should be the real takeaway. While that number doesn't come close to approaching the 20.9 million that watched the Patriots and Jets play the next night on NBC, it's a sign of the mainstream interest being piqued. So too are the criticisms and interest in the ratings. But that's all it is.

There's a lot of hard work ahead for the UFC, as well as other promotions like Bellator that are hoping to cash in on the opportunities ahead. But our blood pressure doesn't have to rise every time someone says something stupid about the sport. The days of scratching and clawing for attention and acceptance are mostly over. At least for the next seven years, MMA has a major platform from which to shoot down misconceptions and misinformation. In that part of the fight towards mainstream, we have already won.