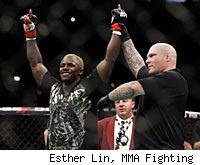 The main event is set for the first UFC fight card to be televised on FX: Melvin Guillard vs. Jim Miller.

The UFC announced on Twitter Thursday evening that a lightweight battle between Guillard and Miller will be the main event of the FX card, which will represent the promotion's debut on its new basic cable home. Beginning in 2012 FX will carry much of the programming that had previously appeared on Spike TV, including Fight Night events and The Ultimate Fighter.

Guillard and Miller were both thought to be closing in on lightweight title contention this year, although both of them lost their most recent fights: Guillard was submitted by Joe Lauzon in October, while Miller lost a unanimous decision to Ben Henderson in August. For the winner of the Guillard-Miller fight, a victory will represent a big step toward getting back into lightweight title contention.

The UFC's tweet said that Guillard vs. Miller will be a three-round fight. It's not clear whether main events on FX cards will generally be three or five rounds going forward. The UFC has indicated that future main events will be five-round fights regardless of whether or not a title is on the line.

The UFC on FX card is expected to take place on January 20 in Nashville, Tennessee. Other fights planned for the card include Charles Oliveira vs. Robert Peralta, Josh Neer vs. Duane Ludwig and Pat Barry vs. Christian Morecraft.