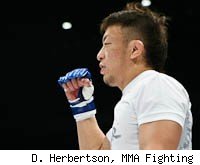 A pair of featherweight bouts have been booked for the Dec. 31 "How Are You?" event (this year's Dynamite!! equivalent) with Tatsuya Kawajiri squaring off against Kazuyuki Miyata and Hiroyuki Takaya defending his belt against Takeshi "Lion" Inoue in Saitama, Japan.

DREAM executive producer Keiichi Sasahara announced the bouts Thursday at a press conference in Tokyo.
Kawajlri (29-7-2) fought in two of the three DREAM events in 2011, beating Drew Fickett and Joachim Hansen. In April, Kawajiri challenged Gilbert Melendez for the Strikeforce lightweight belt and lost by first-round TKO. In his most recent fight against Hansen in September, Kawajiri made the drop to featherweight. Miyata (11-8) fought once this year in a losing effort against Takaya with the DREAM title on the line.

Takaya (16-9-1), who won the DREAM title last New Year's Eve, returned to the U.S. in April for Strikeforce and lost on the undercard to now-UFC fighter Robert Peralta. Takaya then bounced back in July with the aforementioned win over Miyata. Inoue (21-5) won all three of his fights this year against Taiki Tsuchiya, Koichiro Matsumoto and Caol Uno.

The full card will be a mixture of MMA, kickboxing and pro wrestling matches and will air on HDNet.