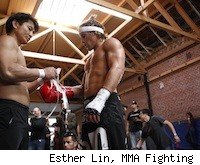 SAN JOSE, Calif. -- Bantamweight champion Dominick Cruz wasn't at the UFC 139 open workouts on Wednesday afternoon. He didn't have to be. Between Urijah Faber and Brian Bowles, the champ managed to loom over nearly every conversation even in absentia, though his former foes weren't exactly singing his praises.

For instance, when asked what he thought of Cruz's decision win over Faber in July, Bowles seemed unimpressed.

If that sounds like Bowles isn't in a hurry to get his popcorn and locate the edge of his seat every time the champ defends his belt, that's no mistake.

As Bowles said of Cruz: "If he's fighting on TV, I'm not watching him as a fan because I like watching his fights. I would be watching because he's my competition and I'm trying to take something from it. If he wasn't in my weight class, I probably wouldn't watch him fight."

Faber, however, insisted he follows every fighter mostly because he's "a huge fan," and claimed that he actually enjoys watching Cruz fight. But even that praise had a needle hiding behind it.

It's almost enough to make you forget that Bowles and Faber are fighting each other on Saturday night, not Cruz. Maybe it's the lack of any personal rivalry between the "California Kid" Faber and, as UFC PR man Dave Sholler jokingly tabbed him, the "Southern Gentleman" Bowles. Or maybe it's just that former champs can't stop thinking about the current champ and how much they'd love to snatch that hardware from around his waist.

As Bowles put it, "The belt is the most important thing, I think, in doing what you're doing. If you're not wanting to be a champion, then you probably shouldn't be in it. Another thing is, if I'm not trying to be champ, the guy standing across from me probably is. He might be training harder. I train like I'm fighting for the belt every time."

Then again, as he sees it, that's not a mistake of marketing so much as the natural and justifiable order of things.

"If [Bowles] is the number one contender and I beat him, then what's the sense of going any lower than that?" Faber said. "It doesn't make any sense. If he beats me, that's a different story. But I'm not going to let that happen. There's a reason I've been at the top of the weight class -- any weight class -- since I started this sport, and that's because there's not many guys up there that can beat me."

Of course, you could also make the case that one reason why Faber never falls far from a title shot is his popularity with fans. With or without the belt he's still one of, if not the biggest draws below 155 pounds, and some would say that the UFC grants him special treatment because of it. Why else would exactly half of his last eight fights have been title fights, even though he lost all of them?

Bowles thinks he has a pretty good idea. Not that he's terribly upset about it.

"Some people are going to be popular and some people aren't. Sometimes you're just gifted with that. It's like the cool kid in school: you don't know why he's cool, but he is. I happen to not have it. Some people have it. Faber has it. It is what it is."

For Bowles, a win over Faber might be a chance to get some of that popularity to rub off on him, or at least get enough of the pixie dust to earn him another shot at Cruz.

For Faber, it's a chance yet another crack at that same title. This time he even has a plan for how to get through to the dense judges at cageside.

"You've got to paint a picture that a kindergartner could understand," Faber explained. "So [if] attempting 12 takedowns and getting one is what I have to do to tell them that, hey, I'm going to win this fight, then so be it. If slap-boxing and touching a guy a couple times instead of knocking him down is what I've got to do, I'll do some of that in addition to knocking him down. You've just got to do more."

Not that he's still stewing over that loss or anything. Not at all.