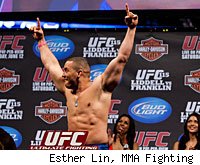 The first live UFC on FX event will happen in January and while an exact date and location is to be announced, there are now two fights scheduled.

On Wednesday, the UFC announced that Josh Neer will fight Duane Ludwig in welterweight action and Pat Barry will take on Christian Morecraft in a heavyweight scrap.

Under UFC's deal with FOX, the promotion will bring four live events to FOX and six to FX each year. These live cards on FX will be similar to the former "Fight Nights" on Spike/"UFC Live" on Versus events. All four fighters announced so far are coming off appearances on UFC Live cards.

Neer and Ludwig matchup well considering that Neer has an aggressive style and Ludwig's strength lying in his background as a Muay Thai fighter. Neer (32-10-1) made his return to the UFC last month with a bloody TKO win over Keith Wisniewski. Ludwig (21-11) has won his last two fights and last competed in August, beating TUF winner 7 Amir Sadollah via unanimous decision.
Barry and Morecraft are heavyweights desperately in need of a win. Barry (6-4) is riding a two-fight losing streak from losses to Cheick Kongo and Stefan Struve. Morecraft (7-1) was knocked out in June by Matt Mitrione and is 1-2 in the UFC.