UFC on FOX Peaks With 8.8 Million Viewers, but There's a Lesson to Be Learned 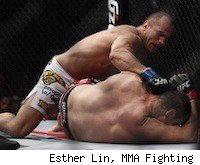 Short but sweet. That's one way to describe the 64-second Junior dos Santos-Cain Velasquez fight on FOX this past Saturday. At least, that's how it must look to the UFC and the network now that the revised ratings info is out.

According to SI.com, the hour-long broadcast began with 5.2 million viewers, then peaked with 8.802 million viewers during the brief but violent contest for the UFC heavyweight strap.

If you're struggling to put those figures in perspective, this means that dos Santos-Velasquez is the most watched MMA fight in American TV history, knocking off the Kimbo Slice-James Thompson brawl on CBS, which lasted about ten times as long and peaked with two million fewer viewers. But while the numbers give the UFC and FOX reason to smile about the newfound partnership, there's a lesson in these stats as well.

For starters, look at the ratings arc. The show began with around 5.2 million viewers, according to SI.com, and then proceeded to lose eyeballs during the 30-plus minutes of pre-fight promo pieces and analysis. That number jumped way up when the fight finally started, then immediately started to decline once it was over.

By the time Velasquez was face down on the canvas, viewers were on their way out. Four minutes after the end of the fight, the show was down to six million viewers and falling.

In other words, even network TV viewers are far more interested in action than in talk, and breathless post-fight analysis is the surest way to send them scrambling for the remote.

If you're Dana White or Fox Sports Media Group Chairman David Hill, here's where you've got to be wondering how big a number you could have had if the fight had only lasted a round or two. You've also got to be wondering about the wisdom of broadcasting just the one fight.

Hindsight being what it is, it's easy to say that the Ben Henderson-Clay Guida fight would have been a ratings magnet as a lead-in for JDS-Velasquez, but that doesn't make it any less true. A jump in numbers like the one FOX saw means that people were likely on the phone or the internet, telling their friends that the fighters were finally on their way to the cage and it was time to tune in. Imagine if those same people had been reaching out to one another during the seesaw bout between the two lightweights, encouraging their friends to get in on this appetizer before the main event.

Could it have broken 10 million viewers? Maybe. Probably. Would it have made the 64-second ending to the heavyweight scrap seem more like an exciting change of pace and less like a long climb for a short slide? Definitely.

Again, it's easy to say that now that we know how the fights turned out, but at the same time, is anyone surprised to learn that so many viewers wanted more fighting and less talking?

If the UFC and FOX are smart, they'll use this as a learning experience. Granted, they won't always feel the need to do so much viewer education once this is no longer a network TV novelty, but clearly it's the action that brings the viewers. Once the fists start flying, that's when people start watching. As much as people might love his product, viewers are far more interested in seeing it for themselves than in hearing Dana White shout about it after the fact.

Still, if the UFC can pull 8.8 million viewers on network TV for a fight that barely lasted long enough for fans to compose a decent text message to their friends, imagine what it will pull once the deal begins in earnest and it can put together a show that's more than just a teaser. If your biggest problem is that you leave your audience wanting more after your network debut, maybe you don't have that many problems.