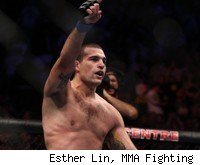 Will Dan Henderson make a statement in his return to the UFC that he deserves to contend for the light heavyweight belt? Or will Shogun Rua beat Henderson and make a case that he should get another crack at Jon Jones? Can Cung Le thrill the fans in his UFC debut, or will Wanderlei Silva pick up a much-needed win? Will Urijah Faber or Brian Bowles take a big step toward a rematch with bantamweight champion Dominick Cruz?

We'll examine those questions and more as we predict the winners of Saturday night's UFC 139 pay-per-view.

When: Saturday, the Facebook preliminary fights start at 6 p.m. ET, the Spike card starts at 8 and the pay-per-view starts at 9.

However, I think it's going to be a moot point, because I think Rua has the right striking style to frustrate Henderson standing up, and I think he'll be just good enough on the ground to avoid getting controlled on the canvas by Henderson, who's a vastly superior wrestler. I like Shogun to win an action-packed fight by decision.
Pick: Rua

Wanderlei Silva vs. Cung Le
I've always enjoyed the aesthetic beauty of Le's san shou style of striking, but I've never believed it would be effective against a top-notch opponent. And so I think the result of this fight hangs mostly on whether Silva is, at this point in his career, even close to "top-notch" anymore.

So is he? Based on the way the Axe Murderer looked against Chris Leben, I'd have to say no: Silva buckled the first time he was hit hard and was knocked out in just 27 seconds. Silva is 2-6 in his last eight fights, and four of those six losses have been ugly knockouts, and so I'm going to lean toward Le to win this one, just because I think Silva has taken so much damage through his spectacular career that he just doesn't have a lot left.
Pick: Le

Urijah Faber vs. Brian Bowles
Faber is another fighter who has had a long and spectacular career but has begun to decline lately: He was 21-1 in his first 22 fights, but has gone just 4-4 in his last eight. However, Faber's only losses have been to featherweight and bantamweight champions, and he has looked awfully good while winning, too. Bowles is a terrific fighter who has bounced back from serious hand and foot injuries to win two in a row, but Faber has such good wrestling and such a diverse style of striking that he should be able to dictate where the fight goes and win a decision.
Pick: Faber

Martin Kampmann vs. Rick Story
This is a very interesting fight between two guys who are right on the cusp of the welterweight Top 10 but who are coming off disappointing losses. Story's wrestling might just be enough for him to control Kampmann for 15 minutes and win a decision, but Kampmann has more ways to win, with a good striking game and varied submissions.
Pick: Kampmann

Stephan Bonnar vs. Kyle Kingsbury
This isn't a great matchup -- neither of these guys is even close to the top of the light heavyweight division -- but it does have the potential to be an entertaining brawl. Bonnar is a fan favorite riding a two-fight winning streak, but Kingsbury is a better technical striker and should beat Bonnar.
Pick: Kingsbury