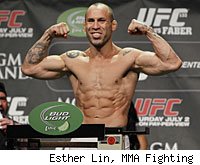 Fresh off the UFC's big network debut on FOX, the world's premier MMA organization is back to doing what it knows best: pay-per-views.

On paper, UFC 139 looks like one of the better cards in recent months, but there's no shortage of fighters who need a win in a bad, bad way. Who are they, what are their chances, and what's likely to become of them if they can't pull out a W in San Jose on Saturday night? For answers, we turn to the Cut List.

Wanderlei Silva (33-11-1 1 NC, 3-6 UFC)
Who he's facing: Cung Le
Why he's in danger: UFC president Dana White has made it clear that he thinks Silva would be better off in retirement, and, you have to admit, the boss makes a compelling case. Silva's 35 (but an old 35, in fighting years), he's lost six of his last eight (and been knocked out in four of those six), and he really has nothing left to prove in this sport. What, is he going to become UFC middleweight champion? Not unless about 10 other UFC 185ers suddenly decide to go live in a monastery and live quiet, non-violent lives somewhere in Belgium. As great as Silva was, and as beloved as he still is by fans, there's no reason for him to keep getting knocked out at this stage of his life. He doesn't need the money or the prestige, and he's too big a name to put in against lesser competition. That puts him in a tough spot, career-wise. If he can't beat Le and show that his fists are still full of fury and his jaw is not made of glass, it might be time for White to sit him down and give him the Chuck Liddell speech.
Outlook: Grim. I'll be honest, I don't like his chances against Le. At least, not unless Le comes to this fight straight from a movie set. Silva still has the one-punch power, but Le has the ability to keep him at a distance and beat him up over several rounds. Once it's over, I'd love to see Silva take his legacy and go home. He's one of the all-time greats. There's nothing left to prove.

Martin Kampmann (17-5, 8-4 UFC)
Who he's facing: Rick Story
Why he's in danger: On paper, he's one defeat away from the dreaded three-fight losing streak. In reality, he's probably the best losing welterweight the UFC has had over the last year. His current skid started when he lost a questionable decision to Jake Shields in October of 2010. Though you could make a case that Shields deserved to win that wrestling match, it's harder to make an argument for Diego Sanchez, who looked like he'd gotten his face stuck in a ceiling fan by the end of his three-round battle with Kampmann. I'm still not sure how Sanchez got that decision, and I suspect Kampmann is equally baffled. That was in March of this year and this is Kampmann's first trip back into the cage since then, so it would be nice if he could get his hand raised for the first time in a year and a half. Against Rick Story, however, he faces another opponent who's not afraid to go out there and get his wrestle on. Can Story do to him what he did to Thiago Alves? If so, then a somewhat comically unfortunate losing streak could turn into a seriously concerning one.
Outlook: Optimistic. Even if Kampmann does drop a decision here, the UFC sees his talent and it isn't going to cast him out so easily. I like his chances to stuff Story's takedowns and force him into a kickboxing match, which Kampmann should win every time.

Jason Brilz (18-4-1, 3-3 UFC)
Who he's facing: Ryan Bader
Why he's in danger: Brilz has also lost two straight, but like Kampmann his is a losing skid with an asterisk. It started with a controversial decision loss against Antonio Rogerio Nogueira in a bout that many thought he deserved to win, and which Dana White held up as proof that the UFC knows what it's doing when it puts together these fight cards, so maybe we shouldn't judge them until they're over. Despite the L on his record, the UFC could not have been more pleased with that Fight of the Night performance from Brilz. Unfortunately, he followed it up with a quick KO loss to Vladimir Matyushenko in April, so in the span of just 20 seconds some of that good will likely evaporated. But hey, anybody can catch one on the chin, right? That doesn't mean he's suddenly garbage. Trouble is, Brilz is facing fellow wrestler and fellow losing streak-owner Ryan Bader. It could easily turn into a snoozer of a wrestling match, and if it does the loser might feel the brunt of the UFC's anguish over it. Then again, it could be the kind of fight where two wrestlers end up brawling for 15 minutes, and Brilz could, even in defeat, once again be White's hero at the post-fight presser.
Outlook: Decent. Brilz is clearly a talented athlete, but he does not give one the impression that fighting is his life, probably because it isn't. He's got a job and a family, and this is more an interesting side gig for him. That might make the UFC reluctant to keep bringing him back if he gets knocked out here, and it also might make him less likely to get fired up about getting back on top.

Matt Brown (12-10, 5-4 UFC)
Who he's facing: Seth Baczynski
Why he's in danger: Look at his record. He pulled himself up from the brink with a decision win over John Howard, and he looked pretty good doing it, too. But that doesn't change the fact that he's lost three of his last four in the UFC, and most of the guys he has beaten in the Octagon have since been encouraged to seek their employment elsewhere. The win, in conjunction with his fighting style, give him a little breathing room, but not much. Baczynski's already been cut from the UFC once, but came back and got a win in September to shore up his spot. If Brown can't beat a guy on the cusp, the UFC might take a look at the numbers and decide it's time to make room for some new blood at welterweight.
Outlook: Pessimistic. Brown has shown flashes of real talent followed by long stretches of mediocrity. What he needs right now is consistency. What he needs is a win followed by a bunch more wins. But my guess is that whether it happens now or a year from now, the UFC will soon decide that he's had enough chances.

Shamar Bailey (12-4, 1-1 UFC)
Who he's facing: Danny Castillo
Why he's in danger: If your lone loss in the UFC is to Evan Dunham, you aren't doing so badly. But if your lone win is over Ryan McGillivray, well, it kind of evens out. Bailey had a short, fairly undistinguished stay in Strikeforce and then started out hot in his run on TUF 13, but things didn't go his way in reality TV-land. Still, he got a shot on the finale, won a decision, then lost a decision against his first real UFC opponent in Dunham. Now he faces Castillo in what could be a fight that sways the UFC one way or the other on him, and it's a bout in which oddsmakers favor Castillo by a 3-1 margin.
Outlook: Grim. If he gets beat here -- and chances are he will -- the UFC has no shortage of hungry young lightweights out there just itching to get his spot. He'll need to show them something memorable, or else prove the oddsmakers wrong with a win.