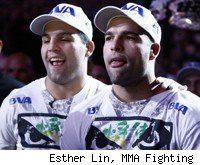 On November 3, 2001, the fans at the Tokyo Dome were treated to a great fight between Dan Henderson and Murilo "Ninja" Rua at Pride 17. A decade later, Henderson will take on Ninja's little brother Mauricio "Shogun" Rua at UFC 139.

And just because it's been 10 full years since the Henderson-Rua fight, that doesn't mean Shogun has forgotten. In fact, Shogun said on Wednesday that he's been motivated during his preparation for the fight with Henderson to avenge his big brother's split decision loss to Henderson from the Pride days.

And Rua said that watching and re-watching that fight, and discussing the fight with his brother, has helped him to formulate his game plan for his own bout with Henderson.

"Certainly that was a great fight," Shogun said. "I watched that fight between my brother and Henderson a number of times. It was a very competitive fight. My brother is one of the people who helped me a lot with my strategy for Dan. I hope to impose my game plan, knowing it's going to be a tough fight with a great fighter. That was a great fight and I have good memories of it."

Henderson has even better memories, because he won -- but only after a brutal battle, and only by split decision. Henderson said he expects a similarly difficult time fighting against the younger Rua.

"It was a tough fight," Henderson said. "It was a war and I would expect the same from his brother."