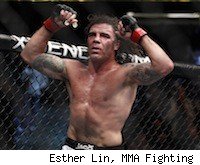 Two years ago, in the hours after UFC 103 in Dallas, I spoke to Antonio Rodrigo Nogueira about one of the night's big stars. Deep in the bowels of the American Airlines Center, the longtime MMA veteran had the look of a proud father of his face. That was the night when his student Junior dos Santos officially joined the "in the mix" category that signifies contention status.

That was also the night that Nogueira made a prediction that would come true.

"He's going to be a future champ for sure," he told me at the time. "Without a doubt. He's strong, fast, athletic. He has good wrestling, good ground game. He's a complete fighter."

dos Santos' march through the UFC has been incredibly impressive to watch. In eight UFC fights, he's unbeaten and has yet to lose even a single round among the 14 rounds he's fought. That's far short of the record (33) held by Georges St-Pierre, but with his well-rounded game, the 27-year-old Brazilian's performances have shown no signs of slowing.

Since this column is designed as a look forward for the recent event's participants, and we already know that dos Santos will take on the winner of December's Brock Lesnar vs. Alistair Overeem fight, it's fair game to project how he'd do against either.

Given dos Santos' proven success in stopping takedowns, the Lesnar fight would likely be a more favorable matchup for him. He's stopped 85 percent of takedowns, according to FightMetric, and Lesnar does not have the comfort level or arsenal to match him in a striking contest.

Overeem would be a more intriguing style matchup. As one of the most decorated strikers in MMA, he might be the only heavyweight with the firepower to bang with dos Santos.

Cain Velasquez
It was a rough night for Velasquez, who never got his motor started before the ref was calling a halt to the action. He also faced post-fight criticism from UFC president Dana White regarding his game plan, but it's never wise for a fighter to move in for a takedown without a setup. Velasquez likely felt he had five rounds to implement what he wanted, so there was no reason to rush. But apparently there was. It seems that he brought injuries into the fight that deserve some time to heal. Velasquez deserves the time to address his injuries and come back strong, maybe in the summer of 2012.

Ben Henderson
dos Santos vs. the Overeem-Lesnar winner wasn't the only guaranteed fight we got out of UFC on FOX. We also learned that Ben Henderson would get a chance to face Frankie Edgar for the lightweight title in February.

Henderson's improvement has been rapid since joining the UFC, as he's learned how to seamlessly combine striking/wrestling transitions. That will be a great skill to bring in against Edgar, who has spent his last four fights competing against fighters who became quite reliant on throwing their hands. Henderson mixes up his game in a way that will make him a tougher matchup for Edgar than either BJ Penn or Gray Maynard, and that's saying a lot.

Clay Guida
UFC's Energizer bunny fought a spirited bout, responding from some early trouble to give Henderson a real fight, but saw his wildness exploited by Henderson's technique. Guida remains a very popular fighter so there's definitely still space for him on an upcoming main card against a relevant opponent.

Dustin Poirier
Since losing his Zuffa debut while in the WEC in August 2010, Poirier has turned heads with four straight wins. The featherweight captured his third straight bout since moving over to the UFC, defeating the tough Pablo Garza with a D'arce choke submission. At 22 years old, Poirier is one of those talents you hope the UFC moves up in a careful manner, matching him up with fighters of similar experience level. That leads me to this ...

Ricardo Lamas
Since moving to featherweight, Lamas has won both of his fights, and finished his opponents in both fights. Lamas is 11-2 and Poirier is 11-1. You know where I'm going with this, don't you?

Kid Yamamoto
Yamamoto was soundly out-grappled by Darren Uyenoyama in a three-round decision loss that marked a fourth loss in his last five fights. While Yamamoto was once one of the top lower-weight fighters in MMA, it appears that time has passed. In the past, his wrestling would have been enough to keep the fight upright where he enjoyed a sizable striking advantage, but he never came close to implementing that type of game plan against Uyenoyama. The only question now is whether Yamamoto gets cut, or gets one more chance.

Prediction: Yamamoto gets kept around, and faces an organizational newcomer at UFC 144 in Japan

Alex Caceres
In his first two UFC fights, Caceres looked out of his depth in the organization, getting outclassed in a pair of submission losses. After dropping to bantamweight, he looked recharged and refreshed, outworking Cole Escovedo in a strong decision win. The victory gives Caceres new life on a career that seemed like it could be destined to head back to the indies.