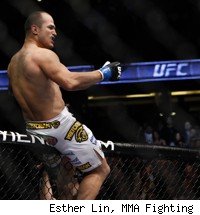 Junior Dos Santos has had a rather amazing UFC career. Signed to make his debut against Fabricio Werdum at UFC 90, Dos Santos was such a big underdog that some people suggested he was only brought to the UFC because it would give Werdum an easy win on his way to a heavyweight title shot. Instead, Dos Santos knocked Werdum out in the first round, beginning a UFC run that would lead to him taking the heavyweight belt from Cain Velasquez on Saturday night.

There's nothing the least bit fancy about what Dos Santos does: He just hits the other guy really, really hard. Dos Santos is 8-0 in the UFC, and he finished six of his opponents with punches, while winning the other two fights by lopsided unanimous decision, battering those two opponents with punches for 15 minutes each. And yet even though everyone who steps into the Octagon with Dos Santos knows what's coming, no one can do anything about it.

So there's little doubt that Dos Santos is at the top of our heavyweight rankings. For the rest of the rankings, see below.

Top 10 heavyweights in mixed martial arts
(Editor's note: The individual fighter's ranking the last time we did heavyweights are in parentheses.)

1. Junior Dos Santos (2): The biggest question for the UFC's bottom line is how many of the new viewers who tuned in to see the fight on Saturday night are now Dos Santos fans who will pay to watch him again. Dos Santos isn't a proven pay-per-view draw yet, but he's an appealing and likable fighter who has just reached by far his biggest audience yet.

2. Cain Velasquez (1): I firmly believe that Velasquez will be back. Velasquez has too much talent and too much work ethic not to be fighting for the heavyweight title again some day in the future.

3. Alistair Overeem (3): I think Overeem would represent the most interesting possible opponent for Dos Santos. Overeem is the one fighter in the heavyweight division who might actually be a better striker than Dos Santos, and if Overeem can beat Brock Lesnar on December 30, then some time in 2012 we'll see Overeem and Dos Santos go at it.

5. Fabricio Werdum (5): In the last four years Werdum's only losses have been to Dos Santos and Overeem, while he's had impressive victories over Gabriel Gonzaga, Brandon Vera, Mike Kyle, Antonio Silva and Fedor Emelianenko. Werdum fights high-level opponents and usually comes out on top, and I'm excited about the prospects of seeing him back in the UFC soon.

6. Daniel Cormier (6): The 9-0 Cormier has hardly even been tested so far in his MMA career, including a dominant first-round knockout victory over Antonio Silva in September. He's set to face Josh Barnett in the Strikeforce Heavyweight Grand Prix final, and if he wins that fight, the logical next step would be a shot at the UFC heavyweight title.

7. Shane Carwin (7): Carwin has lost back-to-back fights to Lesnar and Dos Santos, and his bad back is expected to keep him out for several more months, so he may drop in the heavyweight rankings soon.

8. Frank Mir (8): Mir has won two in a row since being knocked out by Carwin a year and a half ago, and in December he'll try to make it three straight wins with a rematch against Antonio Rodrigo Nogueira. If Mir wins that one, he'd make a lot of sense as the next opponent for Velasquez.

9. Josh Barnett (9): Although UFC President Dana White has badmouthed Barnett many times, there's little doubt that he'll be welcomed back to the UFC if he beats Cormier to win the Strikeforce tournament.

10. Antonio Silva (10): Bigfoot's future is a bit murky because the future is murky for everyone who's still on the Strikeforce side of the Zuffa roster. But in the UFC there are a lot of very interesting fights for Silva. A UFC debut against the loser over the Overeem-Lesnar bout would be a huge heavyweight fight to make in 2012.