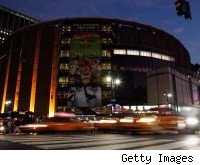 Zuffa announced on Tuesday morning that it had filed a lawsuit in U.S. district court against New York Attorney General Eric Schneiderman and Manhattan District Attorney Cyrus Vance Jr. seeking a declaration that the mixed martial arts ban in New York State violates the First Amendment. You can read the full complaint here.

MMAFighting.com spoke to Barry Friedman, a professor of law at New York University, and one of the lawyers working on the case, about why the complaint was filed and the timeline ahead. You can read our conversation below.

Ariel Helwani: This is a unique case, Barry. Are you aware of any kind of precedent for a case like this?
Barry Friedman: Let me tell you two separate things: the first is, they hadn't gone to court because they really had hoped to work this out in the legislature and did their best to do that, and having gotten nowhere, decided that they would take the next step of going to court. In terms of precedence, there are a lot of First Amendment cases involving sports to the extent that you could make sense of them as a group. They tend to distinguish between the question of whether practicing a sport, engaging in a sport, like at the gym, is protected versus doing it in front of an audience, in front of a crowd. And that's our claim. It's the performance before a live audience. That's the only thing that the state seems to think is banned in New York. As you no doubt know, there are countless MMA gyms in the city, and there are lots of people engaging in it. There are millions who watch on TV. What's banned is having a match in Madison Square Garden.

When did Zuffa decide that this would be the best course of action?
The UFC is continuing its legislative efforts -- there's no question about that. They're ongoing at the same that we filed the lawsuit. Just to give you a sense of our situation in New York, it's passed our State Senate a couple of times, it's passed through some of the relevant committees in the Assembly or House. There was a petition last year with almost the majority of Assembly members saying that they would support repealing the ban. We've had at least one Governor say he would support repealing the ban. So we've just been in this weird political situation here where we can't get it up for a vote. So at that point, not unlike a lot of other situations, when you can't recourse in the legislature, the courts are often where you go.

If Zuffa wins this lawsuit, does that mean the ban is lifted?
Yes. To be slightly more precise, there are a variety of claims and they may have a different impact, but in general, the correct answer is if we prevail the ban is lifted. In fact, in theory, the day we win, there could be a match here in New York.

Zuffa has talked about how the Culinary Union in Nevada is largely behind the situation in New York. Will you look to expose that situation in this case?
It doesn't play any role in the lawsuit. The lawsuit only asks the question, is the New York law consistent with the Constitution? When you're answering that question, you have to answer a variety of questions: for example, the First Amendment claim, the central claim here, asks is what the UFC fighters are doing is expressive? And if it is, and we believe strongly that it is, then the state has a very high burden of showing why they have to ban it completely. Remember, it's not like they regulated it and we're complaining about a regulation -- they've banned it completely. You can't do that with speech without a really, really good reason. So that's the kind of question that you ask. Is it expressive? Does the state have a reason for banning it? Is that reason acceptable?

As you may know, there are two reasons that the state has given for banning mixed martial arts: one is that it's not safe, and the other is that it sends a bad, violent message. We don't think that's the message. When you read our complaint, and I hope you do, you'll see that there are fighters and fans talking about all the messages that fighting does send other than violence: things like discipline, hard work, strength, courage, respect for your opponents. But even if the whole reason that it was banned was violence, that still violates the Constitution.

You might have heard about this, the Supreme Court had a case last year involving violent video games being sold to minors in California, and the Court struck down that law, saying you can't ban violence as a message. So even if that were true, that would not be legitimate because we don't think that's the message. And then if it's safety -- remember, this law was passed a long time before there were unified rules or any of that -- we don't think the sport was so dangerous back then -- there was a lot of hype -- but today it's obviously a complete different thing and there's lots of data that shows that mixed martial arts is safer than football, boxing, ice hockey, downhill skiing, equestrian sports.

What kind of timeline are we looking at here? How quickly can the case move along?
Not quickly. The judicial process can be slow. Typically, it would take the state a month or so just to respond, and we would have some initial briefing. Typically what happens in a case like this is that the defendants file a motion to dismiss, which says, Look, even if we accept it's true, everything that they've said in their complaint, we still win on the law. So usually that gets litigated and it takes a while. At some point in there, the party starts to take discovery, which means they do depositions and gather evidence that they want to present in court, and that takes a while. So it's not the kind of thing that happens over night.

Have you ever worked on a case like this?
I don't know what "like this" means. I've worked on lots of cases. I've done First Amendment cases; I've never represented a sports team or athlete. If you look at the complaint, we're also representing fans and gym owners. I've done a lot of constitutional cases.

Several big name fighters, such as Jon Jones and Frankie Edgar, are singled out as plaintiffs in the complaint. Why?
That's a hard question to answer for a lot of reasons, including we could have had a lot more plaintiffs, so at some level we just tried to pick a representative group. We think they're representative in a lot of different ways. Some of them are New Yorkers or in the vicinity. A lot of the plaintiffs who are not champion fighters are New Yorkers, also amateur fighters, fans, gym owners, and so we just tried to get a sample of the many people who might want to be involved. A lot of these plaintiffs just said to us, I just want to be part of history.