Anthony Pettis vs. Joe Lauzon Set for UFC 144 In Japan 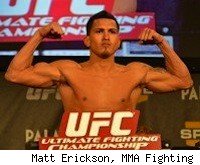 A lightweight meeting pitting Anthony Pettis and Joe Lauzon has been agreed to for UFC 144 in Japan, MMA Fighting has learned.

The UFC confirmed the matchup to MMA Fighting's Ben Fowlkes on Tuesday.

The matchup had previously been rumored, with a possible date in Las Vegas. Instead, it will go international.

The fight should prove to be a high-octane battle between two of the division's most offensive-minded fighters.

Lauzon is riding a two-fight win streak, most recently upsetting the surging Melvin Guillard with a first-round submission win at UFC 136. That improved his record to 21-6.

Pettis recently rebounded from a loss that snapped a four-fight win streak by defeating Jeremy Stephens by decision, also at UFC 136. With the win, he's now 12-2.

The duo essentially booked the match on their own. Shortly after UFC 136, Pettis said he would welcome a match with Lauzon, and Lauzon accepted, setting the future date.

UFC 144 will take place at the Saitama Super Arena in Saitama, Japan on February 26, 2012. It will mark the promotion's first time in the Land of the Rising Sun under the Zuffa banner. The main event will also be a lightweight match, with champion Frank Edgar defending the belt against newly named No. 1 contender Ben Henderson.