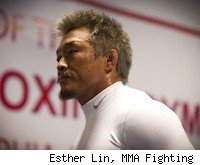 Yoshihiro Akiyama will make the move down to welterweight to tangle with former divisional No. 1 contender Jake Shields at UFC 144 in Japan.

The UFC confirmed the bout on Monday afternoon.

Akiyama had lost three straight as a middleweight, dropping bouts to Vitor Belfort, Michael Bisping and Chris Leben, and it had been feared that he may be cut from the promotion. Instead, he finds new life as a 170-pounder.

The 36-year-old, who is 13-4 with 2 no contests, will no doubt help sell tickets in his native Japan.

Meanwhile, Shields will be looking to bounce back from his 53-second knockout loss at the hands of Jake Ellenberger in September. The defeat came just two weeks after the passing of his father, Jack.