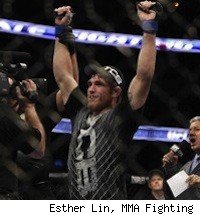 More than a year since his last time out in the Octagon, Tom Lawlor is finally healthy and ready to return at Saturday's UFC 139. Waiting across the way from him when he walks into the middle of the HP Pavilion will be Chris Weidman, a fast-rising prospect who is unbeaten and has won both of his bouts since signing with the UFC earlier this year.

For Lawlor, the matchup came as no surprise. Before Weidman was ever in the UFC, he made Lawlor's radar after defeating his friend James Brasco in a submission grappling match at 2009. With Weidman in the nascent stages of his MMA career at the time, it was a clear stretch he was going to be a player on the world middleweight scene.

Just six fights into his career, Weidman will be at a disadvantage from an experience standpoint. With Lawlor having more time under his belt, he thinks that's the advantage that will send him to victory.

"He's impressive, but kind of like me, he's still pretty young in his career," Lawlor said on Monday's edition of The MMA Hour. "I have double the amount of fights he does. He only has six fights. So there's a lot of things he hasn't experienced and I think I'm going to be able to exploit some of that."

Weidman is a former two-time collegiate wrestling All-American, and has landed six of his nine takedown attempts fighting in the UFC. Many feel that advantage gives Weidman the edge going into the fight.

In training for this bout, Lawlor traveled to Temecula, California to work for the last several weeks with Team Quest, a camp renowned for its wrestlers. While Lawlor says that wasn't the sole reason for his work on the west coast, it will certainly come as a benefit.

For Lawlor, his performance usually starts at the weigh-ins, where he's notorious for his appearances, usually coming out dressed as a character from MMA's past. Among his recent stage entries were Dan Severn, Harold Howard and the "Just Bleed" guy from UFC 1.

With 13 months to ponder his next time in front of the audience, Lawlor has something planned for UFC 139, and it's something big.

"Unless they stop me right before I go out there, it's going to be really good," he said. "It might top all the past things that I've done and that's saying a lot. I get a lot comments on the Dan Severn thing, I get a lot of comments from real hardcore fans on the 'Just Bleed' guy. But I really think this will take the cake. It's going to set a new standard for weigh-ins."