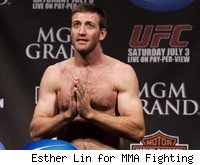 The MMA Hour returns on Monday afternoon with another jam-packed two-hour show. Here's who will be stopping by:

* Light heavyweight Stephan Bonnar will preview his UFC 139 fight against Kyle Kingsbury and look back at UFC on FOX 1.

* UFC play-by-play man Mike Goldberg will also recap the historic night that was in Anaheim, Calif.

* Bantamweight Miguel Torres will talk about his UFC 139 fight against Nick Pace.

* And we'll debut a new segment called "5 Rounds," where two MMA journalists debate five topics with yours truly serving as judge after each "round" using the ever effective 10-point must system to determine a winner. The fifth round winner will be decided by the fans via our chat and Twitter. This week, MMAFighting.com's Mike Chiappetta and Michael David Smith will go toe-to-toe.

*** You can also stream the show live on your iPhone or iPad by clicking here.